The Rajya Sabha on Wednesday passed the Jammu and Kashmir Budget 2022-23 and Appropriation Bills with a voice vote. The Bills were then returned to the Lok Sabha. 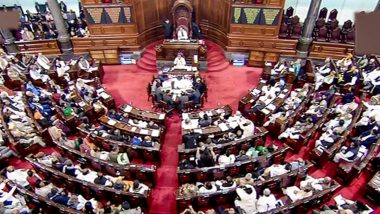 New Delhi, March 23: The Rajya Sabha on Wednesday passed the Jammu and Kashmir Budget 2022-23 and Appropriation Bills with a voice vote. The Bills were then returned to the Lok Sabha. The Lower House has already passed the J&K Budget 2022-23 on March 14, thus Parliament approved the 1.42 lakh crore Budget for the Union Territory of J&K.

Replying to the discussion, Union Finance Minister Nirmala Sitharaman said that the Central government has been creating an environment for the restoration of normalcy and to attract investment in J&K. She said that 24 Members participated in the debate and informed the House that the government is removing barriers to industrial development in the Union Territory and in this connection, 250 laws have been completely repealed, while 137 laws have been amended.

Responding to the query of Congress lawmaker Vivek Tankha who had raised concerns on Tuesday that Kashmiri art and artisans are about to vanish without adequate support, the Finance Minister said, "A new industrial policy, investment proposals will create employment in Jammu and Kashmir. Pashmina shawls, carpet weaving from J&K have been given Geographical Indication (GI) recognition and ample steps have been taken to promote Kashmiri art and artisans."

Speaking about the security situation in the UT, she said peace and development have been ushered in post Art 370, industrial promotional schemes have been implemented, opening the doors for development in the UT. She added that after the abrogation of Article 370 in J&K, the security situation has also improved and there has been a decline in terror-related incidents there. "Since 2021, there has been a 33 per cent drop in infiltration and 90 per cent decrease in ceasefire violations along the border. Furthermore, there has been a 61 per cent decline in terror-related incidents in J&K in 2021," she said.

Union Ministers informed that a delegation from the Gulf Corporation is visiting the UT on Wednesday for investment and providing employment opportunities to the youths of Jammu and Kashmir. As per the information provided by the Jammu & Kashmir government, 1,41,815 new projects have been taken up in the Union Territory. Sitharaman informed the Upper House that funds amounting to Rs 27,274 crore have been provided for the completion of these developmental projects. "The projects are creating significant employment opportunities for skilled as well as unskilled labourers, engineers, transporters and small businesses, in addition to those engaged in the supply of material, equipment, and tools in the private sector," she added.

Talking about the health infrastructure, she said that the UT has recorded 100 percent vaccination while two 500-bed Covid hospitals have been set up by the DRDO in Jammu and Srinagar. Election Commission to Issue Notification for Biennial Elections to Fill 13 Vacancies in Rajya Sabha.

Responding to the concerns of some Members that capital expenditure has been reduced under many heads, she said that it was not true. Noting that expenditure creates assets, Sitharaman said that public health has an increase of 282 per cent, disaster management and relief has 390 percent, irrigation and floods 60 percent, agriculture 26 per cent, industry 33 percent, education 18 percent, tourism 10 per cent, and culture has an increase of 18 percent.

Referring to employment opportunities in J&K, she said the new industrial policy of Rs 28,400 crore will generate 4.50 lakh jobs while 4226 investment proposals worth Rs 47,441 crore received so far will create 1,96,945 jobs for the youths of J&K. Rajya Sabha Elections 2022: Harbhajan Singh, AAP MLA Raghav Chadha Among 5 Candidates Nominated by AAP to RS.

The Finance Minister said that over 20,323 posts have been referred to the recruitment agencies. Apart from these, around 1,37,870 youths of the UT have been provided assistance under the self employment schemes programme and they will also generate jobs for their fellow Kashmiris.

(The above story first appeared on LatestLY on Mar 23, 2022 06:45 PM IST. For more news and updates on politics, world, sports, entertainment and lifestyle, log on to our website latestly.com).