Sanjit Yadav Murder: Lab Technician Who Went Missing One Month Ago, Killed After Being Abducted in Kanpur, Friends Reveal During Police Probe

In a shocking incident of crime, lab technician Sanjit Yadav whose missing complaint was registered last month has been killed. 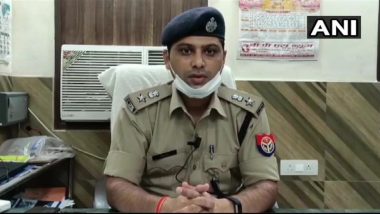 Kanpur, July 24: In a shocking incident of crime, pathology lab technician Sanjit Yadav whose missing complaint was registered last month has been killed. According to Dinesh Kumar, SSP Kanpur, "On June 23, Yadav's missing report was registered at Barra Police station and three days later, an FIR was registered. His family received a ransom call on June 29, and based on probe, people including two of Yadav's friends were arrested."

It was during the police interrogation, the accused revealed that the victim was murdered by them on June 26-27 and the body was disposed of in Pandu river. SSP Kumar informed that teams have been formed to recover Yadav's body. Journalist Vikram Joshi Dies After Being Shot at in Front of His Daughters in Ghaziabad, 9 People Arrested So Far.

During interrogation, they revealed that the victim was murdered by them on 26-27 June & the body was disposed off in Pandu river. Teams have been formed to recover the body: Dinesh Kumar, SSP Kanpur https://t.co/Ls2iOWZOoP

Just a few days back, Journalist Vikram Joshi who was shot at in Vijay Nagar area on July 20 by unknown persons died. Nine people in connection with the case were arrested. Vikram Joshi was travelling on a motorcycle with his two daughters when a group of men assaulted him and opened fire at him. The incident was widely criticised by the opposition and they blamed the Yogi Adityanath led UP government for unleashing 'Gunda raj' in the state.

(The above story first appeared on LatestLY on Jul 24, 2020 08:51 AM IST. For more news and updates on politics, world, sports, entertainment and lifestyle, log on to our website latestly.com).