The Supreme Court on Tuesday stayed the implementation of three farm laws enacted by the Narendra Modi government in September last year. A bench headed by Chief Justice S. A. Bobde and comprising Justices A. S. Bopanna and V. Ramasubramanian issued the verdict while hearing a plea challenging the farm laws. 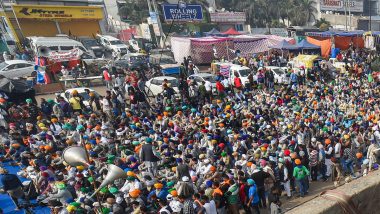 New Delhi, January 12: The Supreme Court on Tuesday has put on hold the implementation of three farm laws enacted by the Narendra Modi government in September last year. A bench headed by Chief Justice S. A. Bobde and comprising Justices A. S. Bopanna and V. Ramasubramanian issued the verdict  while hearing a plea challenging the farm laws. Chief Justice SA Bobde said, "We are staying three farm laws until further orders," The supreme court formed a four-member committee to resolve the issue. The top court also issued notice to farmers' unions to stop the tractor rally which is scheduled on January 26.

"These are matters of life and death. We are concerned with laws. We are concerned with lives and property of people affected by the agitation. We are trying to solve the problem in the best way. One of the powers we have is to suspend the legislation," reported NDTV quoting the CJI as saying. The four members named in the committee are - Bharatiya Kisan Union President Bhupinder Singh Mann, International Policy Head Dr Pramod Kumar Joshi, Agriculture Economist Ashok Gulati and Anil Dhanvat of Maharashtra's Dhanvat Shivkeri Sangathan. Supreme Court Proposes to Stay Implementation of Farm Laws Amid Farmers' Protest, CJI SA Bobde Says 'Centre Has Not Handled The Matter Properly'.

The Supreme Court's judgment came a day after it lashed out at the Centre over the farmers' protests. On Monday, Chief Justice Bobde repeatedly questioned the Centre's counsel - Attorney General K.K. Venugopal and Solicitor General Tushar Mehta - why are they insisting on the implementation of the law. The top court observed the talks between farmers and the Centre have failed to make any headway, as the former wants laws to be repealed and the latter wants point by point discussion. The CJI had even said, "You tell us if you will put on hold the implementation of the laws. Otherwise, we will do it." Farmers Allegedly Go on Rampage at Venue of Haryana CM Manohar Lal Khattar’s Event in Karnal, Stage Vandalised.

The CJI also recommended appointing a committee to hear arguments of both sides so that a solution could be reached. However, farmers unions, refused to be part of the committee if formed by the apex court. "Though all organisations express great respect for the Hon'ble Supreme Court for it's understanding of the problem and comforting words expressed during the hearing today," said a statement issued by the unions.

The three farm laws enacted by the government in September last year triggered countrywide protests by farmers, especially from Punjab and Haryana. Farmers fear that the new laws will dilute the minimum support price and will destroy APMCs. Till now eight round of talks between farmers' leaders and the Centre have taken place. However, no breakthrough has been achieved.

(The above story first appeared on LatestLY on Jan 12, 2021 01:41 PM IST. For more news and updates on politics, world, sports, entertainment and lifestyle, log on to our website latestly.com).