The Supreme Court on Monday proposed to stay the implementation of the three farm laws passed by the Centre in September last year. The top court while hearing a plea challenging the three farm laws asked the Narendra Modi government whether it could put a hold on the controversial laws or the court would do it. 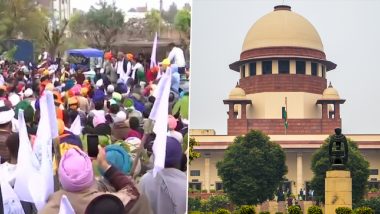 New Delhi, January 11: The Supreme Court on Monday proposed to stay the implementation of the three farm laws passed by the Centre in September last year. The top court while hearing a plea challenging the three farm laws asked the Narendra Modi government whether it could put a hold on the controversial laws or the court would do it. The apex court’s remarks came at a time when the farmers’ protest has intensified against the laws.

“You tell us if you will put on hold the implementation of the laws. Otherwise, we will do it. What is the problem in keeping it in abeyance?,” reported The Live Law quoting Chief Justice of India SA Bobde as saying.  Lashing out at the Centre, the CJI said that it had not handled the situation properly. The CJI also said that there is not a single petition before the top court saying that the laws are good. Farmers' Protest Enters Day 47: Singhu Farmers Rename Protest Areas, Check Roads to Avoid And Alternate Routes to Take in Delhi Due to Agitation.

CJI says, if the Centre does not want to stay the implementation of farm laws, we will put a stay on it https://t.co/OD7qvNpROz

The CJI also recommended to appoint a committee to hear arguments of both sides so that a solution could be reached. He sated that the court was suggesting staying the implementation of farm laws only to facilitate the talks before the committee.

CJI Bobde also said, “Some people have committed suicide, old people and women are a part of the agitation. What is happening?” The top court said that the protest could continue even after the stay on the implementation of the three farm laws. The CJI said, “We will stay implementation of laws, says CJI. You can carry on the protest. But the question is whether the protest should be held at the same site.” Farmers Allegedly Go on Rampage at Venue of Haryana CM Manohar Lal Khattar’s Event in Karnal, Stage Vandalised.

Meanwhile, advocate Dushyant Dave appearing for one of the farmers' unions questioned that how such important laws be passed through voice vote in Parliament. He further added, "If the Centre is serious, then it can hold a joint session of Parliament. Why is the govt shying away from it."

The three farm laws enacted by the government in September last year triggered countrywide protests by farmers, especially from Punjab and Haryana. Farmers fear that the new laws will dilute the minimum support price and will destroy APMCs.

Till now eight round of talks between farmers’ leaders and the Centre have taken place. However, no breakthrough has been achieved. Farmers are demanding the complete rollback of the laws, while the government has offered only amendments in the laws.  Farmers are currently protesting at Delhi borders against the laws.

(The above story first appeared on LatestLY on Jan 11, 2021 01:43 PM IST. For more news and updates on politics, world, sports, entertainment and lifestyle, log on to our website latestly.com).