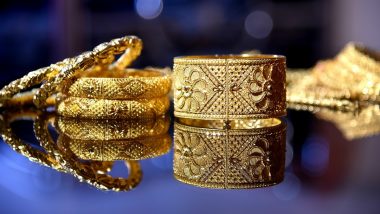 Chennai, September 21: Two software professionals returned gold ornaments lying on road to its rightful owner through cops. S Balasubramaniyan and V Seenuvasan were sipping tea at a shop in Perumbakkam in Tamil Nadu's Chennai when they found a few pieces of gold jewellery on the road. This happened on September 18. The owner reportedly dropped the ornaments while removing mask from his pocket. Police returned the valuables to their owner yesterday. Tamil Nadu Shocker: 9-Year-Old Boy Assaulted For Resisting Sexual Advances In Chennai; 17-Year-Old Accused Arrested.

Balasubramaniyan and Seenuvasan went to a tea shop after finishing work around 8:30 pm. They were sipping tea when they noticed a ring dropped on the road. They also saw another ring, a bracelet and a chain. "We decided to refrain from touching the gold when we saw a ‘thayathu’ (pendant), as we suspected that someone could have performed black magic and threw the jewellery to divert us," Balasubramaniyan was quoted by TOI as saying. Bengaluru: Techie Woman Finds Husband’s Profile on Gay Dating Apps and Chatting With Multiple Partners, Files Divorce Plea.

They checked if someone was playing prank with them and also inquired if the gold jewellery belonged to shop staff. They then handover the ornaments to the tea shop workers and told them to give the gold to the rightful owner if he/she came in search. As proof, they clicked a photograph of handing over the gold. The duo went home but remained worried. Eventually, they came back, took the jewellery from the shop workers and handed them over to the police.

On Monday, the owner visited the tea shop while searing his valuables. He was told to go the Perumbakkam police station. After confirmation, the police gave the gold to him. The owner told cops to convey his gratitude to the two techies. The police also praised the duo for their honesty and efforts.

(The above story first appeared on LatestLY on Sep 21, 2021 01:24 PM IST. For more news and updates on politics, world, sports, entertainment and lifestyle, log on to our website latestly.com).