UP Woman Duped of Rs 32 Lakh by Instagram Friend from UK, Probe Underway

The woman had come in contact with the man in September on Instagram where he identified himself as 'Harry', a resident of the UK, and exchanged phone numbers, starting off regular conversations over social media. 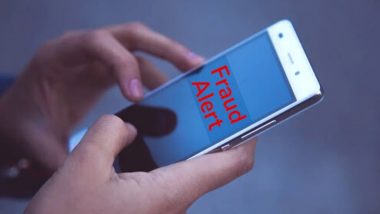 Rae Bareli, October 8: A woman from Rae Bareli district in Uttar Pradesh has allegedly been duped of over Rs 32 lakh by a person whom she befriended on Instagram. The 'friend' claimed that he was a resident of the UK. The woman was informed that a 'gift' and some 'foreign currency' worth Rs 45 lakh had arrived in Delhi for her from the UK and she would have to pay a fee to collect them.

"She was asked to make the payments online and in several instalments. Eventually, she ended up transferring around Rs 32 lakh after which there was no communication from the other side," an official said.

Shlok Kumar, Rae Bareli Superintendent of Police (SP), said the police have taken cognisance of the matter and the cyber cell is investigating the case. "Efforts are on to trace the culprits and bring back the money duped online from the victim,", the SP said. Gurugram Man Duped of Rs 71 Lakh by Fraudster on Pretext of Business Proposal Promising Handsome Returns.

The woman had come in contact with the man in September on Instagram where he identified himself as 'Harry', a resident of the UK, and exchanged phone numbers, starting off regular conversations over social media.

After receiving the call about the gifts and UK currency, the woman reached Delhi where she realised that she had been conned. She returned to Rae Bareli and approached the district police this week.

The SP has now asked people to be wary of lucrative online offers and schemes, and asked them to confirm the authenticity of the persons they are dealing with in order to stay safe from cyber criminals. Ahmedabad Man Duped of Nearly Rs 40 Lakh by Fraudster On Fake Promise of Petrol Pump Dealership.

The Uttar Pradesh Police, as part of a national initiative, had, in May this year, started a dedicated helpline number 155260 where people can report online frauds and cybercrimes. People can also dial 112 immediately to report any online fraud, UP Cyber Police chief Triveni Singh said.

Till September, the Uttar Pradesh Police had brought back over Rs 2 crore that cyber criminals had conned from state residents and had got another Rs 5 crore frozen in bank accounts that thugs had duped people of.

(The above story first appeared on LatestLY on Oct 08, 2021 09:04 AM IST. For more news and updates on politics, world, sports, entertainment and lifestyle, log on to our website latestly.com).