Woman Employee in Nellore Under AP Tourism Department Attacked by Male Colleague After She Advised Him to Wear Mask; Shocking Video Caught on CCTV 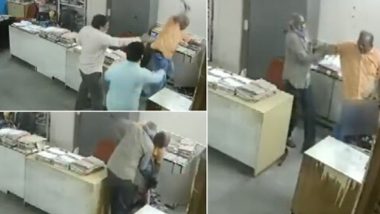 Andhra Pradesh, June 30: In a shocking incident, a woman employee of a hotel in Nellore under Andhra Pradesh Tourism Department was ruthlessly attacked by her male colleague after she reportedly asked him to wear a face mask. The incident took place on June 27, however, the incident came to the light after the video went viral on Tuesday.

A case has been registered against the man under relevant sections, according to an ANI update. The incident has been captured in a CCTV footage, where the man can be seen barging towards the woman and ruthlessly hitting her. Canara Bank Female Employee Assaulted by Surat Police Constable, Nirmala Sitharaman Takes Note of Incident, Assures Safety of Bank Staff And Action Against Accused.

According to an Indian Express report, the accused Bhaskar Rao had a grudge against the woman, and she insulted her using filthy language and thrashing her with a broken arm of a chair in front of everyone. In the past, the woman and her husband had rebuked him for spreading rumours about her.

#WATCH An employee of a hotel in Nellore under Andhra Pradesh Tourism Department beat up a woman colleague on 27th June following a verbal spat. Case registered against the man under relevant sections. pic.twitter.com/6u9HjlXvOR

The woman fell on the floor and the accused can be seen dragging her by the hair and assaulting her over the face, head and back. Other colleagues intervened and tried to stop the agitated man from further attacking the woman.

(The above story first appeared on LatestLY on Jun 30, 2020 12:58 PM IST. For more news and updates on politics, world, sports, entertainment and lifestyle, log on to our website latestly.com).