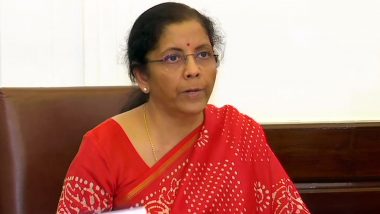 Surat, June 24: A video recently went viral of an incident that took place inside a Canara Bank branch in Surat. In the video, a police constable is seen hitting one female staff and he created a ruckus on Monday. Taking note of the incident, Finance Minister Nirmala Sitharaman assured that the matter would be looked into immediately and timely action would be taken on the FIR filed.

In another tweet, she further said, "Wish to assure that the safety of all members of staff in banks is of importance for us. Amid challenges, banks are extending all services to our people. Nothing should threaten their safety and dignity." The FM mentioned that after speaking to the Commissioner of Police, Bhrambhatt (IPS), he assured her that he himself would visit the branch and would look into the safety of the staff. "Also he assured that the accused constable shall be suspended immediately, " she said.

After the incident came to the light, All India Bank Employees' Association on Tuesday wrote a letter to FM asking her to save the bank staff from such assaults by enraged customers. Doctors and Nurses Testing and Treating COVID-19 Patients Attacked by Mobs in Delhi, Indore and Other Cities, Shocking Videos and Reports of Stone Pelting, Spitting on Healthcare Workers Emerge.

My office spoke to the Commissioner of Police, Shri. Bhrambhatt (IPS). He has assured us that he himself will visit the branch & assure the staff of their safety. Also he assured that the accused constable shall be suspended immediately. @CP_SuratCity @PIB_India @canarabank

Here's the video of the incident, where a police constable is seen misbehaving with a woman staff:

@CP_SuratCity @collectorsurat @dgpgujarat this is how one of ur Policeman is behaving in a Branch!! Hit one female staff, created ruckus in branch, haven't wore mask, entered in internal area of branch only meant for staff, Snatched phone of the one who was exposing this man!! pic.twitter.com/Jn8dczjoMy

Here's what the incident is:

On Monday, an unknown person entered the Canara bank branch at 4:20 PM and asked the woman clerk for passbook printing. However, he was informed that the printer was not working. He was further informed that the time for the customer services was already over at 4 pm.

He soon lost his temper and started using foul language. He attacked a female clerk, slapped and pushed her. Due to which, she fell down and injured herself. The lady staff reportedly suffered a fracture. He also hit another male staff. It soon came to the light that the accused belonged to the Police. On Tuesday #ShameSuratpolice trended on Twitter as the video went viral.

(The above story first appeared on LatestLY on Jun 24, 2020 10:53 AM IST. For more news and updates on politics, world, sports, entertainment and lifestyle, log on to our website latestly.com).