She along with her mother Y.S. Vijayamma continued the fast at their Lotus Pond residence in upscale Banjara Hills. A large number of policemen remained deployed around their residence. 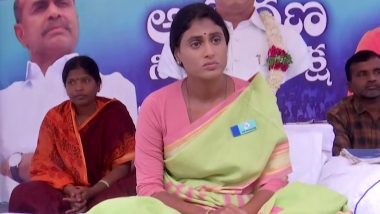 Hyderabad, December 10: YSR Telangana Party (YSRTP) president Y.S. Sharmila continued her indefinite fast for the second day on Saturday at her residence in Hyderabad, protesting against denial of police permission for her padyatra.

She along with her mother Y.S. Vijayamma continued the fast at their Lotus Pond residence in upscale Banjara Hills. A large number of policemen remained deployed around their residence. YSRTP Leader YS Sharmila Compares Telangana Rashtra Samithi With Taliban.

Sharmila has alleged that leaders and workers of the party were being restrained by the police from reaching her residence. The YSRTP leader made it clear that she would continue her fast till the police gave permission for the padyatra.

Sharmila was detained by the police on Saturday after she sat on the fast at Dr Ambedkar's statue at Tank Bund in the heart of the city. She was dropped at her residence. She along with her supporters began the fast on a road near their residence. She was detained again and was forced to move into the house. Hyderabad Police Drag Sharmila Reddy's Car As She Sits Inside and Continues To Protest Against Telangana CM KCR (Watch Video).

The YSRTP leader then started her fast in the house. Her mother also joined her in solidarity. Several leaders and workers of YSRTP were arrested and shifted to police stations on Saturday. Party spokesman A. Somanna took ill at Bollarum police station. He was shifted to the police station. Earlier, Sharmila alleged that Chief Minister K. Chandrasekhar Rao has been throttling the voices of dissent that rose against his autocratic and corrupt rule

"It is deplorable to note how a person sitting in the seat of a chief minister can be so dictatorial, rather than be reasonable and fair. Our padyatra is a mission to expose tyrannical rule and a platform for the hapless people to air their concerns and problems. The padayatra has never failed in maintaining camaraderie and peace, all along its 3,500 km of journey, adhering to law and order and within the democratic setup," she said.

She claimed that KCR, as the Chief Minister is popularly known, and his partymen realised that the padyatra had completely exposed their failures and foul games.

"YSR Telangana Party is today a threat to KCR and his BRS and they have bitterly turned against us, having realized this changing course of public opinion, steered by YSR Telangana Party. There have been continuous attempts to scuttle the yatra and demoralize us? If you are not scared of the changing public mood and the growing strength of YSRTP, then why these attacks?" she asked.

BRS workers had allegedly attacked Sharmila's padyatra at Narsampet in Warangal district on November 28. Protesting against some remarks made by Sharmila against local TRS MLA, the protesters had set afire her bus and pelted stones on other vehicles. Later, police arrested Sharmila as she refused to call off the padyatra in view of the tense situation in the area. Police had shifted Sharmila to Hyderabad.

The next day, she was arrested again amid high drama while leading a protest march towards the Chief Minister's official residence. She was driving a car damaged in the attack and wanted to stage a protest in front of the residence. The police, however, stopped her enroute. When she refused to come out of the car, the vehicle was towed to a police station.

The sister of Andhra Pradesh Chief Minister Y.S. Jagan Mohan Reddy later tried to resume the yatra from the same place but the police denied permission citing violation of the conditions laid down while granting permission earlier.

(The above story first appeared on LatestLY on Dec 10, 2022 11:51 AM IST. For more news and updates on politics, world, sports, entertainment and lifestyle, log on to our website latestly.com).