5 EVMs Per Constituency To Be Verified With VVPATs in Lok Sabha Elections 2019, Orders Supreme Court

During the hearing today, the bench headed by Chief Justice Ranjan Gogoi asked the ECI several question regarding the information mentioned on the slips and the process in place to authenticate the genuineness of these paper slips. 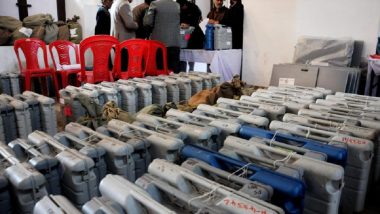 New Delhi, April 8: Days ahead of the Lok Sabha Elections 2019, the Supreme Court on Monday increased voter-verified paper audit trail (VVPAT) from one EVM per constituency to five randomly selected Electronic Voting Machines (EVMs). The top Court said that this decision was taken to ensure the greatest degree of accuracy and satisfaction in the election process. During the hearing today, the bench headed by Chief Justice Ranjan Gogoi asked the Election Commission of India (ECI) several question regarding the information mentioned on the slips and the process in place to authenticate the genuineness of these paper slips.

In a major setback to opposition parties, the court has merely increased the quantum of EVM verification using paper trail by 1.99 per cent. This means out of total 10.35 lakh EVMs, only 20,625 will be used in counting to verify results. The direction of the top Court comes after a plea by leaders of 21 opposition parties who wanted it to be hiked to 50 per cent of EVM's per Assembly segment. EVMs in Lok Sabha Elections 2019: All You Need To Know About Electronic Voting Machine.

The increase in the VVPAT would neither require additional manpower nor delay the results of the Lok Sabha elections, the court noted. According to the apex court's direction, the VVPAT slips of 5 EVMs in every place will be subjected to physical counting. What Is EVM? FAQs Answered on Electronic Voting Machine Ahead of Lok Sabha Elections 2019.

The opposition parties had demanded raising the number of EVM machines to 5.17 lakh. With the first phase of voting starting on April 11, the court hoped this would satisfy both the political parties and the voter. The voting to elect the 17th Lok Sabha will take place in seven phases between April 11 and May 19, while the counting of votes will be done on May 23.

(The above story first appeared on LatestLY on Apr 08, 2019 02:09 PM IST. For more news and updates on politics, world, sports, entertainment and lifestyle, log on to our website latestly.com).