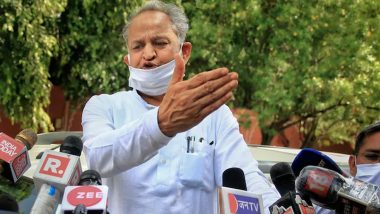 Jaipur, July 26: Rajasthan Chief Minister Ashok Gehlot posted a video message on his social media handle as part of the Congress' 'Speak Up For Democracy' online campaign. Gehlot did not mince words to target the Bharatiya Janata Party (BJP)-ruled Centre, accusing it of hatching a conspiracy to topple his government in the state.

"Democracy is in danger," said Gehlot, adding that not only the common people of the nation, but also those in power in the states and Centre must be cautioned against the violation of democratic norms. Congress to Stage Protest Outside All Raj Bhavans in the Country, Except in Rajasthan, Says State PCC Chief Govind Singh Dotasara.

The Congress veteran accused the Narendra Modi-led Centre of attempting a coup in Rajasthan amid the pandemic. "At this time, we must join hands to fight coronavirus. But your intentions are different," he alleged.

"When the disease was in its initial phase, you (Centre) were focused on toppling the democratically elected government in Madhya Pradesh. You succeeded. Even now, when the disease is rapidly spreading, your focus is to overturn the government in Rajasthan," Gehlot added.

Watch Video of Gehlot's Tirade Against The Centre

The political crisis in Rajasthan erupted earlier this month, when Congress' state unit chief Sachin Pilot rebelled against the party and shifted his base to Delhi. 18 MLAs supporting him are camping at a resort in Manesar, located in BJP-ruled Haryana.

The Congress, in bid to suppress the rebellion, sacked Pilot as the deputy CM and issued a disqualification notice to all the 19 rebel legislators. The MLAs moved the Rajasthan High Court, where they were granted interim relief from action by the Speaker. The legislators are granted immunity till the Supreme Court decides on the matter.

(The above story first appeared on LatestLY on Jul 26, 2020 08:48 PM IST. For more news and updates on politics, world, sports, entertainment and lifestyle, log on to our website latestly.com).