Congress to Stage Protest Outside All Raj Bhavans in the Country, Except in Rajasthan, Says State PCC Chief Govind Singh Dotasara 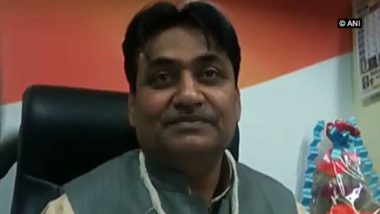 Jaipur, July 26: The Indian National Congress on Monday will launch nationwide protests in front of all Raj Bhavans in the country against the "anti-democratic and anti-constitutional" actions of the Bharatiya Janata Party. Rajasthan Congress President Govind Singh Dotasara, however, said that protest will not take place in Rajasthan. Rahul Gandhi Breaks Silence on Rajasthan Political Crisis, Tweets 'BJP Conspiracy Against Ashok Gehlot Govt Clear, Governor Must Call Assembly Session'.

"Congress party will stage a protest outside all Raj Bhawans in the country tomorrow but we won't do that in Rajasthan. We've sent Cabinet's revised note to Governor and hope he'll soon give his approval for convening Assembly Session," Dotasara said.

Congress party will stage protest outside all Raj Bhawans in the country tomorrow but we won't do that in Rajasthan. We've sent Cabinet's revised note to Governor&hope he'll soon give his approval for convening Assembly Session:Govind S Dotasra, Rajasthan Congress Chief(file pic) pic.twitter.com/ctptfmQ89Z

The grand old party on Saturday said that the protest is being held as the "very basic constitutional and democratic frame of the Nation is facing an unprecedented attack from the BJP.

Congress General Secretary KC Venugopal said, "Democratic institutions, constitutional values and institutions are being subverted and subjugated in a dangerously premeditated manner, with democratically elected opposition Governments in one State after another being toppled by the BJP, using money, intimidation and blatant misuse of constitutional bodies and functionaries."

Meanwhile, Rajasthan Chief Minister Ashok Gehlot, who is facing a rebellion by his former deputy Sachin Pilot and other MLAs, on Sunday requested Governor Kalraj Mishra to start assembly session to discuss bills and COVID-19 crisis. The proposal did not mention a floor test.

Rajasthan plunged into political turmoil after differences between Gehlot and Pilot came out in open. Pilot was removed as Deputy CM and state PCC chief on July 14 Assembly speaker CP Joshi has sent disqualification notices to Pilot and 18 other MLAs.

(The above story first appeared on LatestLY on Jul 26, 2020 07:59 PM IST. For more news and updates on politics, world, sports, entertainment and lifestyle, log on to our website latestly.com).