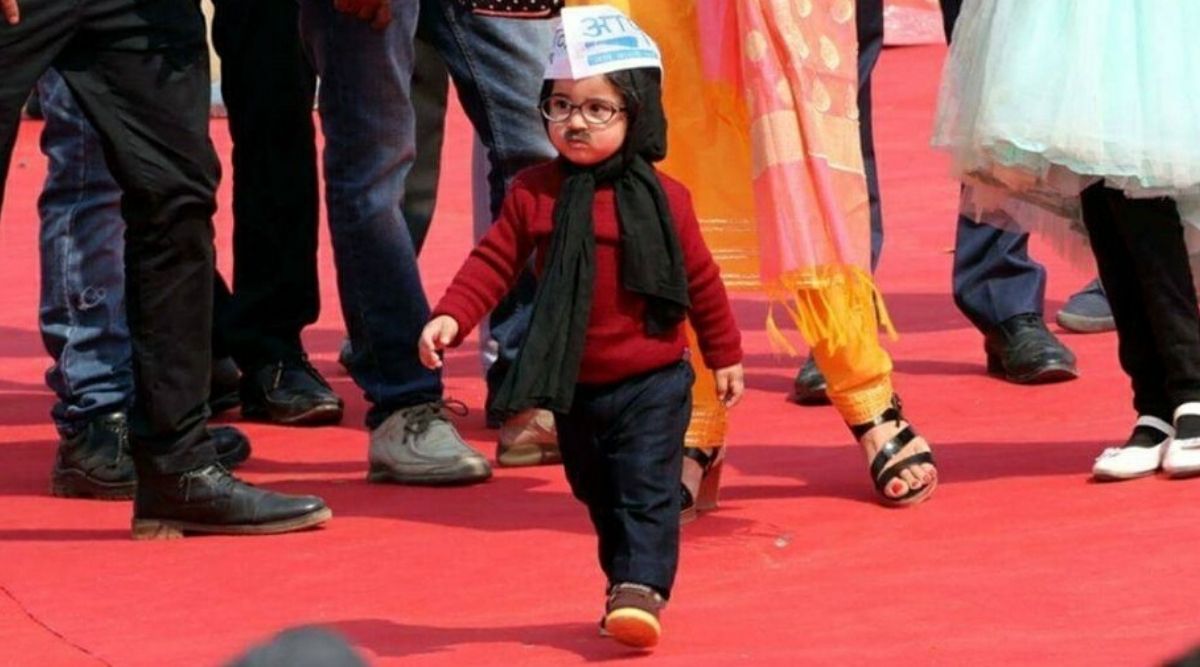 Delhi, February 17:  The 'Little Mufflerman', the young boy who took social media by storm on the day of Delhi Assembly vote counting, was also the centre of attraction at Arvind Kejriwal's swearing-in ceremony as the Chief Minister of the national capital. The young boy was officially invited by AAP to take part in the oath-taking ceremony. He was the star as several politicians came and posed with Baby Muffler Man.

The young boy's dressed up as Chief Minister Kejriwal, with a cap bearing the party's symbol, a v-neck maroon sweater and of course a muffler wrapped around his head. The boy also wore spectacles similar to the AAP chief's and even sported a fake moustache as he pointed towards the sky. 'Mini Mufflerman' Wins Hearts on Twitter as AAP Records Landslide Win in Delhi Assembly Elections 2020.

The 'Little Mufflerman', the young boy who took social media by storm as the mini version of Arvind Kejriwal, was the centre of attraction at the AAP chief's swearing-in as Delhi Chief Minister on Sunday. Many people, including party lawmakers were seen shaking hands with the boy and taking pictures with him as Kejriwal took oath as the national capital's chief minister for the third time.

AAP MLAs & MPs lined up for selfies with 'Junior Kejriwal' aka 'Baby mufflerman' at @ArvindKejriwal's oath.

Full 7 minute footage of what Kejriwal Jr did on my YouTube👉https://t.co/sgoJZSYODg pic.twitter.com/BUHbm7lXJE

The young boy was officially invited by AAP to take part in the oath-taking ceremony. The 'Little Mufflerman' had taken Twitter by storm on counting day as the AAP emerged victorious in the Delhi Assembly elections. Looking at the popularity which the young boy got on social media. Other young boys were also present at the swearing-in-ceremony dressed as Mini Mufflerman.

The AAP sweeped the Delhi Assembly Elections 2020, repeating its performance in last elections, winning 62 seats in the 70-member Assembly, in the face of a high-voltage campaign by the BJP.