Coronavirus Tests Conducted in Delhi Are Highest in The World, 3,057 Tests Done Per Day Per Million Population: Arvind Kejriwal 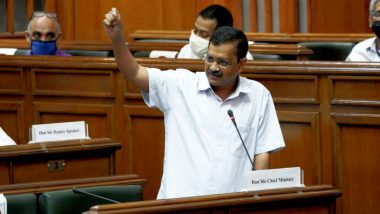 New Delhi, September 15: Addressing the Delhi Assembly in a special session held today, Chief Minister Shri Arvind Kejriwal said that the people of Delhi have been able to control Corona to a huge extent, and this was possible only with the support of the two crore people of Delhi. He said that the Delhi Model is being discussed across the world due to various measures taken by the government. CM Shri Arvind Kejriwal said, "First, we need to understand that the situation of Corona, was the toughest in Delhi across the country. We must keep this in mind whenever we compare the situation from other states. Corona in India came from outside, India did not have any Corona cases of its own. Corona had a huge impact in countries such as Italy and London, and many other countries and the Indians living there asked the governments of those cities that they wanted to go back to Delhi.

Kejriwal said the Indian government decided to bring these people back to India by sending special flights. Delhi is the national capital of India, and so 80%-90% of all the flights landed in Delhi. Corona was a new disease then, and nobody knew about any protocol or guidelines to be followed, no quarantine, and no isolation. Our Health Secretary wrote a letter to all the district magistrates on March 22, in which he has written that 32000 passengers have come back to India in a single month. He also wrote that the 32000 people who have landed in Delhi have gone to different parts of the city, and the need is to identify them. Centre had then released Corona guidelines around March 18 which necessitated quarantining of people traveling from outside. It was impossible to identify these 32000 people spread all over Delhi. These 32000 people had travelled from nations where the impact of Corona was huge, and you can perceive that most of these people must already be infected by Corona. The cases were not 0 in number, there were 5000-6000 cases in Delhi when Corona started. Then the lockdown happened, and there was nothing, no PPE or testing kits. Delhi started monitoring the situation, and it was able to control the situation of Corona to a great extent. This is the result of only one thing, which is teamwork. We realized that this is a pandemic, and nobody can handle it alone. If Delhi would have tried to handle it alone, we would not have been able to do it. We took help from everyone. I want to thank the Centre for helping us whenever we needed them. They gave us PPE kits, oxygen cylinders and testing kits. No government can handle it alone. The society came forward to help us, the two crore people of Delhi, many social organizations, many doctors' associations helped us. An NGO StepOne helped us, religious organizations such as Radhaswami Satsang and Jain Dharamshala helped us."

"We have a weakness, sir. We do not need how to do politics, but this weakness has become our biggest strength right now. I always say, the credit is yours and all the responsibility is mine. Whenever Delhi faces trouble, the responsibility is mine," he added. Delhi Allows Re-Opening of Gyms, Yoga Institutes, Weekly Markets Across National Capital Except in COVID-19 Containment Zones.

CM Shri Arvind Kejriwal said, "Delhi Model is being discussed all across the world. This Delhi Model is not because of Kejriwal, it is because of the two crore people of Delhi. The biggest strength of the people of Delhi is that they have an honest, hardworking, and educated government. In the last 5-6 months, the people of Delhi have shown the path not only in Corona management but in a lot of developmental issues. The maximum number of tests across the world and all the nations are conducted in Delhi. Around 60,000 tests are conducted in Delhi on a daily basis, which means that 3000 tests are conducted per day on 1000000 people. On the per day testing front, which is 3000 per day per 1000000 across the country, Delhi is at the top, Andhra Pradesh is second at 1362, Gujarat is third at 1000 which is one-third of us, Karnataka at 983, Haryana is 990, Maharashtra is 802, Uttar Pradesh is 670, and the average of the whole nation is 819. Just like 3000 tests per day per million in Delhi, England is also testing at 3000 per day per million, the USA is at 1388 per day per million, Russia is at 2300, Peru is at 858 tests per day per million, which means that the tests in Delhi are the maximum. We have tested around 21,00,000 lakh people in Delhi until now, which is 11% of the 2 crore population of Delhi. No other state or city in the world has tested 10% of its total population."

He said, "I want to request the opposition leaders, I am not saying that the Corona management in Delhi is 100% correct. If there are mistakes, we have to correct them. It is our responsibility as well as your responsibility to check on the mistakes. If we are at fault, you should also correct our mistakes, Delhi has elected us as well as you. If you find someone positive, please call me and Satyendar Jain, we will work together to treat him. Why is testing important? It is important because it has been revealed in the Sero-survey that around 700000 people have got infected and have recovered in Delhi. No matter how many tests we conduct, it will be less. If possible, we will test the two crore people of Delhi, but we do not have that capacity. If we conduct more tests, more positive cases will come forward. But we do not have to be scared because of these numbers, we have to be scared of deaths as we do not have to let the death cases rise."

"We have conducted micro-audits of the Corona cases, hospitals, and the process a patient goes through in Delhi. We conducted micro-management of all hospitals in Delhi. Today, the death rate in Delhi is 0.6%, which I think is the least in all the states. Second, the home isolation idea was invented in Delhi for the first time across the world. We used to study the visuals and reports of all nations on the internet across the world. We used to hear that across countries, hospitals were crowded and patients were laying on the roads, and we used to feel that if the European countries were like this, what would happen with Delhi? On studying, we got to know that they used to send all positive patients to hospitals. Such bed strength will not be available in any hospital, be it any developed nation. We then decided to split the process into two parts, keeping asymptomatic patients or patients with mild symptoms in home isolation. There were two advantages because of this, earlier people were not getting tested out of a fear of going to a quarantine center if tested positive. Just like people used to say chickenpox will be cured at home, this can be treated at home too. The facilities are very good too and the patients can get treated with better facilities at home rather than at hospitals. Doctors call the patients twice a day, inquire about their health and, we have given them oximeters to check oxygen levels," said the CM.

He said, "We have treated around 1,15,254 people in home isolation until now, out of which 16568 people are still in home isolation and 96288 people have recovered. Only 30 people have died out of 1.25 lakh people in home isolation, which is 0.03% and is most probably the least in the world. Many countries have praised the home isolation model of Delhi, even the ambassador of Korea is studying the home isolation model of Delhi. We have given confidence to Corona warriors that the whole country and the government is with you. We salute your hard work. If anything unfortunate happens with you, we will give an honorary compensation of Rs 1 crore to your family. When we announced this, the doctors and nurses gained confidence that the government is with us. I do not think no state or nation is doing this".

He further said, "In April or May, we conducted plasma therapy trials. We read that it was happening in China, we asked for permission from the Centre and we got the permissions for Phase 1, 2, and 3. I am happy that the world's first plasma bank was set up in ILBS hospital in Delhi. The work that we started in April and May, the President of the USA Donald Trump allowed that on August 19, 2020. Around 1965 people were given plasma in Delhi. I am happy that the people of Delhi are getting a chance to serve the people of the nation. The people from the entire nation trust the hospitals in Delhi, be it government or private. People from Rajasthan, Uttar Pradesh, Madhya Pradesh, Jharkhand, Bihar, and Punjab, and until now we have treated 5264 people from outside Delhi. Delhi is proud of this. I also hope that Corona will teach us a lesson. A quick turnaround happened in Delhi because we invested in the healthcare sector in Delhi in the last five years".

In his address, he added, "The Corona infection demands a special treatment. We had to convert all beds in LNJP hospital to Corona beds for treatment. This turnaround was possible because a basic infrastructure was available with us. I hope that just like Delhi, other states will also invest in their health infrastructure. This is a tough phase and no government can tackle it alone, everyone has to come together. AAP was not only formed for fighting elections or for power, but AAP was also formed for the nation. Every breath of every AAP volunteer is for the nation. I have told all the volunteers to not be scared. This is not the time for the blame game, every state and central government is doing its best. The volunteers are distributing oximeters to the people. If the oxygen levels are less, they are taking the patients to the hospitals. I remember someone saying that the scale on which the oximeter campaign of AAP is running, the AAP should be named in the Guinness Book of World Records. This is a very difficult phase for everyone. In the history of mankind, no other pandemic has ever hit the world. We have to keep our politics aside and work together for humanity."