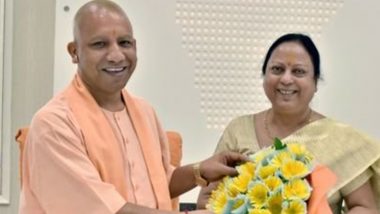 After Kamal Rani's death, the council of ministers held a condolence meeting and observed a two-minute silence on the occasion. The Yogi Adityanath government also announced a state mourning. The cremation will take place in Kanpur later in the day. The Chief Minister said the demise of Kamal Rani was "disturbing" and described her as a "devote public leader" in her condolence message on Twitter. 42 COVID-19 Patients Go 'Missing' in Uttar Pradesh's Ghazipur, Authorities Unable to Trace Due to Incorrect Phone Numbers, Addresses.

"The information about the untimely demise of my colleague in the government of Uttar Pradesh, cabinet minister Smt Kamal Rani Varunji, is disturbing. The state lost a devoted public leader today. My condolences to her family. May God grant the departed soul a place in their feet. Om Shanti," Adityanath tweet. Kamal Rani Varun had been admitted to the Sanjay Gandhi Post Graduate Institute of Medical Sciences (SGPGIMS) on July 18.

She had tested positive for coronavirus and was receiving treatment at the SGPGIMS hospital. The 64-year-old Bharatiya Janata Party (BJP) leader was serving as Minister of Technical Education. According to an official statement issued by Professor RK Dhiman, director SGPGIMS, Kamal Rani had comorbidities in form of diabetes mellitus, hypertension, and hypothyroidism.

"She had bilateral pneumonia at admission and was shifted to ICU on the day of admission itself because of high oxygen requirement. Later, she required non-invasive ventilation (NIV) with high oxygen requirements. On evaluation, she had all the features of severe disease and she was given Inj. Remdesevir followed by Tocilizumab following which she had transient improvement in her clinical status for few days but again her condition started deteriorating with progressively increasing NIV and oxygen requirements," the statement said.

Kamal Rani was immediately transfused with convalescent plasma and steroid doses were hiked. She was put on mechanical ventilator on Saturday but her condition continued to deteriorate with hypotension and multi-organ dysfunction and succumbed to her illness.

(The above story first appeared on LatestLY on Aug 02, 2020 02:19 PM IST. For more news and updates on politics, world, sports, entertainment and lifestyle, log on to our website latestly.com).