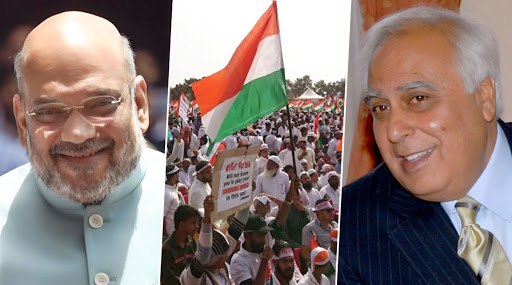 New Delhi, January 22: Senior Congress leader and former Union Minister Kapil Sibal on Wednesday made a counter challenge to Union Home Minister Amit Shah to debate on the Citizenship Amendment Act. Sibal was responding to the challenge of Shah, which the later made in Lucknow on Tuesday.

Challenging the Union Home Minister for a open debate of CAA, Sibal said, as quoted by CNN News 18, "I openly challenge the Home Ministry and the PM to debate me on the issue being faced by the country. Let them be on one side and me on the other, let them choose the time and place." Citizenship Amendment Act Won't Be Withdrawn, No Matter Who Protests, Says Amit Shah in Lucknow.

Earlier, while addressing a gathering in Lucknow on Tuesday, Shah had said, "I have come to you for a Jan Jagaran Abhiyan in Lucknow. Our government is hardly 8 months old but we are conducting this campaign to dispell the falsities being spread by the opposition against CAA. I challenge Rahul Gandhi, Mamata Banerjee and Akhilesh Yadav to engage in a debate on CAA."

Shah in his rally also alleged that the opposition, led by Congress, is trying to create unrest in the country by misleading the people on CAA. He said, "The CAA is not intended to take away the citizenship of anyone. The bill proposes to grant citizenship to persecuted minorities of three neighbouring countries."

However, Sibal had on Sunday said, it will be problematic to oppose the new legislation if the Supreme Court declares it "constitutional". He also emphasized that every State Assembly has the constitutional right to pass a resolution against the CAA and seek its withdrawal. Kapil Sibal Says Problematic for States to Oppose CAA if Supreme Court Declares It 'Constitutional'.

According to the CAA, passed by the Rajya Sabha on December 11, 2019, and got assent for President Ram Nath Kovind a day later, grants citizenship to people belonging from communities of Hindus, Sikhs, Jains, Parsis, Buddhists and Christians. The citizenship will be given to those who flee religious persecution from Pakistan, Afghanistan, and Bangladesh and came to India on or before December 31, 2014.