Lok Sabha Elections 2019: Tejashwi Yadav Says CBI, ED, IT Are Working Like IT Cell of BJP 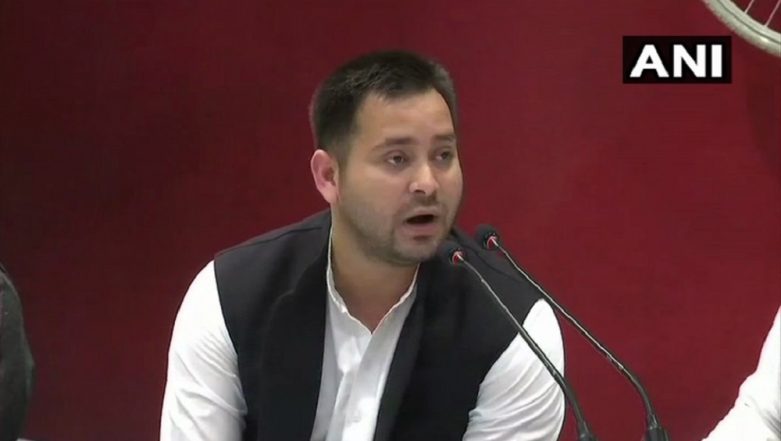 Patna (Bihar), April 27: RJD leader Tejashwi Yadav on Saturday defended BSP supremo Mayawati and said that the Central Bureau of Investigation (CBI), Enforcement Directorate (ED) and Income Tax (IT) department are working like "IT cell" of the Bharatiya Janata Party (BJP).His statement comes a day after the CBI on Friday registered an FIR in a case of alleged irregularities in the disinvestment of seven state-owned sugar mills, in the year 2010-11, leading to a loss of Rs 1179 crore to Uttar Pradesh state exchequer. Mayawati was the Chief Minister of Uttar Pradesh when the alleged irregularities took place. Tejashwi Yadav Mentions Priyanka Chopra's Wedding Reception to Attack PM Narendra Modi.

When asked about Prime Minister Narendra Modi's statement that his house should also be raided by IT department if he makes a mistake, Tejashwi told ANI here, "There was evidence related to Jay Shah (BJP president Amit Shah's son) too. No investigation was done on that. If BJP gave a clean chit, no investigation will be done on that? Raids are being held against Mayawati. This same strategy was used against our family. BJP people are trying to frame opposition leaders. They are doing this because they know that in these polls, they are going to get defeated by 'mahagathbandhan' in respective states. We are fighting to save the Constitutional and the various institutions. The CBI, ED and IT are working like 'IT cell' of BJP." Tejashwi Yadav Calls PM Modi ‘Fake OBC’, BJP Hits Back.

The way they are trying to frame Mayawati, it is a political conspiracy while the Lok Sabha elections are going on across the country. They are afraid of their loss."Tejashwi further claimed that the Opposition's grand alliance will win in the Lok Sabha elections."If we talk about Uttar Pradesh, Bihar, West Bengal and Jharkhand, it will be a very big thing if BJP gets to open its account," he said."We are fighting against BJP on all 40 seats. Tanveer Sahab (RJD Begusarai Lok Sabha candidate Tanveer Hasan) is going to win Begusarai seat and that too by a huge margin. Whatever environment one creates, we aren't bothered, because the public has made up its mind," he added.