'I express my gratitude to my friend President Vladimir Putin, this venture was made possible in such a short time by his support,' said PM Modi. 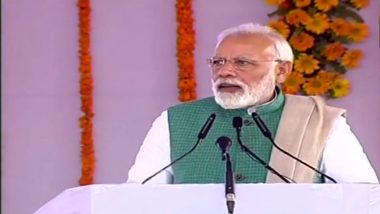 Amethi, March 3: Prime Minister Narendra Modi, speaking at a rally in Amethi, Rahul Gandhi's Lok Sabha constituency, stressed on Made in India initiative and said that "Made in Amethi" will soon become a brand known for AK-203 assault rifles. The Prime Minister said that one of the most advanced rifles in world AK-203 will be made in Amethi as he inaugurated the ordinance factory for Kalashnikov AK-203 assault rifles. PM Narendra Modi at Patna Rally: 'Congress Demoralising Armed Forces by Asking For Proof of Air Strike'.

It will be made by a joint-venture of India and Russia. "I express my gratitude to my friend President Vladimir Putin, this venture was made possible in such a short time by his support."

Watch the Video of PM Modi's Speech in the Tweet Below:

The Prime Minister also praised Smriti Irani, the 2014 losing candidate from the Amethi seat for BJP, for undertaking and "doing a lot of work" despite not winning from the seat. PM Modi targeted the Congress party at the rally in their own stronghold and accused the Congress of playing politics on poverty.

The Prime Minister Narendra Modi launches several development projects in Amethi. Uttar Pradesh Chief Minister Yogi Adityanath also spoke and said that, "when 7,50,000 AK-203 rifles made here will be in the hands of our jawans, the condition of the enemies will be the same as it was after the Air Strikes and Surgical Strike."

(The above story first appeared on LatestLY on Mar 03, 2019 06:16 PM IST. For more news and updates on politics, world, sports, entertainment and lifestyle, log on to our website latestly.com).