Ahead of exit poll results of Madhya Pradesh (MP), Rajasthan and Chhattisgarh assembly elections 2018 to be out on December 7, Satta Bazar has predicted Congress's win in Rajasthan and MP polls. 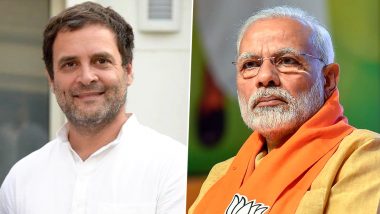 New Delhi, December 2: Ahead of exit poll results of Madhya Pradesh (MP), Rajasthan and Chhattisgarh assembly elections 2018 to be out on December 7, Satta Bazar has predicted Congress's win in Rajasthan and MP polls. However, as per Matka trends, the Bharatiya Janata Party (BJP) is likely to retain power in Chhattisgarh.

According to trends in Satta Bazar, the Congress will get a clear majority in Rajasthan, bagging more than 120 seats, according to a report. Matka in Mumbai predicted 128 to 130 seats for Congress in the 200-seat house. The grand old party is projected to win 132 to 138 seats by Satta Bazar in Jaipur. The BJP may bag not more than 52 seats in the elections, predicted Matka Bazar. Exit Poll Results For MP, Rajasthan, Chhattisgarh, Telangana, Mizoram Assembly Elections 2018: Know Time & Schedule.

In Madhya Pradesh assembly elections, a close fight is witnessed between the ruling BJP and Congress. However, the Congress will have a lead of few seats over the BJP, according to Satta Bazar trends. As per the Indore Satta market, Congress may grab 116 to 118 seats in the 230-seat assembly where 116 seats are required to form the government. The BJP is projected to win 99 to 101 seats in the elections. Lok Sabha Elections Opinion Poll Results by ABP News: NDA Will Retain Power With 300 Seats if Polls Held Today, UPA May Get 116.

The only good news for the BJP is coming from Chhattisgarh where the Raman Singh-led government may retain power. According to Satta market, the BJP is likely to win 43 to 45 seats out of the 90 seats that went to polls in two phases. The Congress, however, is not far behind. Satta Bazar predicted 38 to 42 seats for the opposition party.

The results of assembly elections in Rajasthan, Madhya Pradesh and Chhattisgarh will be announced on December 11.

(The above story first appeared on LatestLY on Dec 06, 2018 07:00 PM IST. For more news and updates on politics, world, sports, entertainment and lifestyle, log on to our website latestly.com).