A new RTI reply of Customs department in Kolkata stated that no action is initiated for any gold haul as alleged by BJP against TMC MP Abhishek Banerjee’s wife - Rujira Banerjee. 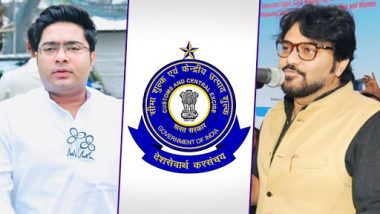 Kolkata, May 10: The curious case of alleged gold haul by Trinamool Congress parliamentarian Abhishek Banerjee's wife at the Netaji Subhash Chandra Bose International Airport took a favourable turn for TMC on Friday. A new RTI reply of Customs department in Kolkata stated that no action is initiated for any gold haul as alleged by BJP leaders against TMC MP’s wife.

According to the case, the alleged incident took place when BJP's MP - Babul Supriyo - alleged that Banerjee's wife - Rujira Banerjee - was caught at the Kolkata airport for having tried to illegally bring in two (2) kilograms of gold. To this, Banerjee had claimed that this is a witchhunt. TMC MP Abhishek Banerjee, Wife Stopped at Airport by Custom Officials For Carrying Gold; Kolkata Police Intervenes.

The BJP has alleged that a complaint that there was an intervention by high and mighty stalling the officials from discharging their duties. The BJP leaders had also alleged that Rujira was involved in the gold smuggling and had brazen out all guns against West Bengal Chief Minister Mamata Banerjee and her nephew Abhishek Banerjee.

Now, the new twist in the case arrived after Office of the Principal Commissioner of Customs, while replying to an RTI had said on May 2, as reported by Times Now, "In the year 2019, SRI (I&I), Customs Wing, CC(P), WB has not detained/arrested/initiated legal action against any persons for illegally carrying gold, foreign currency or any other valuable articles into the country."

The reply the customs was given to RTI activist Prasun Moitra who had asked about the same in his query on April 16, 2019. Now with the latest update, the TMC is alleging that these allegations were made by the BJP leaders to reap political benefit during the ongoing Lok Sabha Elections 2019 in West Bengal.

(The above story first appeared on LatestLY on May 10, 2019 03:40 PM IST. For more news and updates on politics, world, sports, entertainment and lifestyle, log on to our website latestly.com).