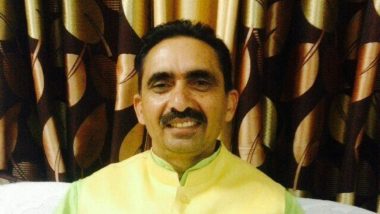 Dehradun, November 22: The Bharatiya Janata Party (BJP) takes pride in Prime Minister Narendra Modi's humble background and often uses it to reach out to common men and women. Similarly, BJP's candidate for mayor post of Dehradun municipal corporation in Uttarakhand, Sunil Uniyal Gama comes from a modest family and had engaged in odd jobs during his struggling days.

The BJP won 60 out of 100 seats in Dehradun municipal corporation election, with mayoral candidate Sunil Gama defeating Congress's Dinesh Agarwal by more than 30,000 votes. According to Gama, he used to sell paan and run a chowmein stall before he entered into constructions. He joined BJP's youth wing in 1991 and since then his political career only saw success. Uttarakhand Civic Election Results 2018: Independent Candidates Win More Seats Than Congress, BJP Together.

“It is only the BJP that could give a ticket to somebody with a humble background like mine. I have done many odd jobs like running a paan shop, photography and selling chowmein. After I lost my stall during an anti-encroachment drive I took up construction work," 56-year-old Gama told a leading daily. His wife Shobha is a government employee.

The couple has a daughter, who is preparing to become a Chartered Accountant, and a son who is an engineer. One of the interesting things about the likely mayor is that the word Gama attached to his name because his physique matched that of a local wrestler who went by the same name.

Gama got his first break in his political career when the BJP appointed him as election coordinator for the Rajpur assembly seat in 2007 assembly elections. During the 2017 assembly polls, now chief minister Trivendra Singh Rawat made the coordinator of his Doiwala assembly seat. Rawat won the seat, and in return campaigned for Gama during the civic body polls.

(The above story first appeared on LatestLY on Nov 22, 2018 05:48 PM IST. For more news and updates on politics, world, sports, entertainment and lifestyle, log on to our website latestly.com).