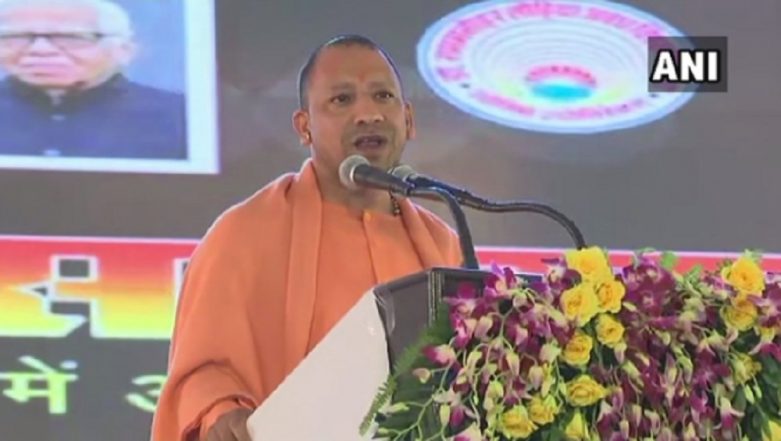 Balurghat, February 3: Lashing out at Trinamool Congress supremo Mamata Banerjee, Uttar Pradesh Chief Minister and BJP leader Yogi Adityanath on Sunday said she has no faith in democracy or the country's Constitution and dubbed her government "anti-democratic, anti-people and anarchic". Adityanath was scheduled to address two rallies at Balurghat in Dakshin Dinajpur district and Raiganj in Uttar Dinajpur district, but the safforn party accused the West Bengal government of denying permission to his helicopter to land here.

"Out of fear, Bengal's Trinamool government did not allow me to go there and that is why I am with you through Modi ji's Digital India programme. The Bengal government is playing with national security," said Adityanath. "This is an anti-democratic, anti-people and anarchic government. The state government is upset as it is scared of BJP's rise," he said while addressing the rally over phone. Bulandshahr Mob Violence: UP CM Yogi Adityanath Announces Rs 50 Lakh Compensation For Family of Slain Inspector Subodh Kumar.

UP CM: Mamata Banerjee has opposed BJP’s 'save democracy' movement from beginning, Amit Shah was to go there to start this initiative,WB govt stopped it. I had rallies in Balurghat&Raiganj today but they didn’t permit chopper landing. That's why had to address rally via telephone pic.twitter.com/pieQjEqAI2

He also accused Trinamool government of obstructing BJP President Amit Shah's 'Rath Yatra' rally and assured party activists that "we are all with you in the fight against this anti-democratic government". In a democracy, there is a difference of opinion, but in Bengal, the opposition's voice is being suppressed, he said. "It has been seen that candidates from opposition parties in the elections were brutally beaten up. These incidents prove that Mamata Banerjee and her party have no faith in democracy and also the country's Constitution," Adityanath said.

Refering to the January 19 public meeting of 23 anti-BJP parties in Kolkata, he said the leaders who attended the event should hide their faces now because the Bengal government has been continuously suppressing people's opinion. The leaders at the January 19 rally had given a call to uproot the Modi government at the Centre in the upcoming Lok Sabha elections.

Adityanath also alleged that efforts were made to stop Durga puja worship during Navratri in West Bengal, and that the Calcutta High Court had to finally intervene. He urged party activists to fight against "goons of Trinamool Congress" and assured the audience that the state government would "fail to stop the rise of the saffron outfit in the state" and that the "BJP would come to power".

Citing Budget proposals, he said 12 crore farmers would benefit from Prime Minister's Kisan programme and over 10 crore workers would get pension of Rs 3,000 a month after attaining 60 years of age. "The Budget provides security guarantee to four crore small businesses and gives increased confidence to the middle class and salaried people towards a better future," he said.