Gandhi Jayanti is celebrated annually on 2 October as a national holiday, observed in all Indian states and territories. Countrymen remember Mahatama Gandhi's principles of violence, peace, non-cooperation, and satyagraha on his birth anniversary to pay reverence to the Father of Nation. 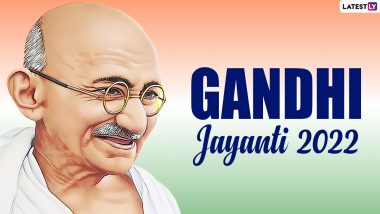 Whenever somebody talks about the struggles behind making India free from the grips of British rule, the name Mahatama Gandhi will always reflect in our minds. There are gazillions of books written on the life history and principles of Gandhi Ji. Each year, India pays tribute to the Father of Nation on October 2 to celebrate his birth anniversary as Gandhi Jayanti across the country with utmost reverence to the freedom fighter. On the same date, the United Nations also observes the International Day of Non-Violence every year after the General Assembly, in a resolution adopted on June 5, 2007.

Mohandas Karamchand Gandhi, the leader, led a successful campaign for India's freedom wrangle. The honorific "Mahatama" was first applied before his name in 1914 in South Africa and today, the countrymen remember the prominent leader by the name of Mahatama Gandhi, whose 153rd birth anniversary will be celebrated as Gandhi Jayanti 2022 on Sunday, October 2. Let us learn more about the selfless soul who sacrificed his life for the betterment of the country.

Commonly called Bapu by his followers, Gandhi Ji was born and raised in a Hindu family in coastal Gujarat and was trained in the profession of law at the Inner Temple, London. He was called to the bar at the mere age of 22 in June 1891. Those who just comprehend him as one of the freedom warriors from India's Independence battle don't know that Gandhi Ji was also an Indian lawyer and political ethicist whose idea of nonviolent resistance is the primary lesson taught in various educational institutions and organizations. Bapu travelled to different parts of India to instil the idea of fighting against British rule in a nonviolent way. In 1951, he also established an ashram common to all religions and castes. He is known for nonviolent civil disobedience in India and South Africa along with the non-cooperation movement and Salt Satyagraha or Dandi March. Here Are 11 Interesting Facts to Know About Mohandas Karamchand Gandhi, Father of The Nation, On His Birth Anniversary.

Gandhi Jayanti is a public holiday in India when banks, post offices and many educational and corporate organizations are closed. Citizens celebrate the National occasion by organizing activities like prayer meetings, ceremonies and painting, and speech and essay writing competitions in various institutions to propagate Mahatama Gandhi's idea of non-violence. His favourite devotional song, "Raghupati Raghav Raja Ram", is usually sung to pay him homage in different cities by colleges, local government associations and socio-political establishments. Correspondingly, statues of Bapu are decorated with flowers and garlands on the day of his birth anniversary.

International Day of Non-Violence is observed every year to honour the birth anniversary of Mahatma Gandhi on October 2. The International Day was commemorated to raise awareness and the important message of non-violence. While the theme for 2022 is yet to be declared, however, it is always associated with the promotion of peace and curbing of non-violence.

(The above story first appeared on LatestLY on Sep 29, 2022 02:04 PM IST. For more news and updates on politics, world, sports, entertainment and lifestyle, log on to our website latestly.com).