According to Hindu Panchang, Gangaur Teej is celebrated on Tritiya Tithi of Shukla Paksha in Chaitra month. This time Gangaur Teej fast will be kept on April 2021 15 which falls on Thursday. This day holds special significance for women. On this day, women worship Gangaur Mata i.e. Mata Gaura. 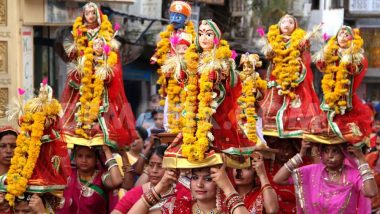 According to Hindu Panchang, Gangaur Teej is celebrated on Tritiya Tithi of Shukla Paksha in Chaitra month. This time Gangaur Teej fast will be kept on April 2021 15 which falls on Thursday. Gangaur worship is considered to be of special importance in Hinduism. The fast of Gangaur Teej is celebrated especially in Madhya Pradesh and Rajasthan with enthusiasm and fervour. The festival of Gangaur starts from the Pratipada of Chaitra Krishna Paksha and concludes with fasting worship on Gangaur Teej on the Tritiya of Chaitra Shukla. In this way, this festival lasts for 17 days. This day holds special significance for women. On this day, women worship Gangaur Mata i.e. Mata Gaura. Know the importance of Gangaur Teej, its shubh muhurat, puja vidhi, samagri, dos and don'ts and auspicious time.

How is Gangaur Celebrated and its Importance

According to mythological beliefs, Mata Gavaraja i.e. Mother Parvati comes to her home on the second day of Holi and after eight days, Iser ji i.e. Lord Shiva comes to take her back. Therefore, this festival starts with the Pratipada of Holi. From this day, married women worship the soil by making clay Shiva, i.e., Gan and Mata Parvati i.e. Gaur. After this, Gangaur i.e. Shiva Parvati are bid farewell to Chaitra Shukla Tritiya. Which is called Gangaur Teej. This festival is very special for newlyweds. The women wake up every morning and pick the flowers, and give them sprinkles of milk from the conch to the Gangaur Mata made of clay. Then, on the day of Chaitra Shukla Dwitiya, water is offered to its worshipped Gangaur after visiting a river, pond or lake. Gangaur is immersed on the evening of Tritiya of Chaitra Shukla Paksha. On Gangaur Teej, married women fast for the long life of their husbands and girls for the attainment of a good groom.

Gangaur is a festival of Rajasthan and bordering Madhya Pradesh which falls on the Teej of Shukla Paksha of Chaitra month. On the day of worship, there is a special provision of offering attention to Renuka and offering Mahavar, vermilion and bangles on it. Worship is made by offering sandalwood, Akshat, Dhoopbatti, Deep & Naivedya.

(The above story first appeared on LatestLY on Apr 14, 2021 12:44 PM IST. For more news and updates on politics, world, sports, entertainment and lifestyle, log on to our website latestly.com).