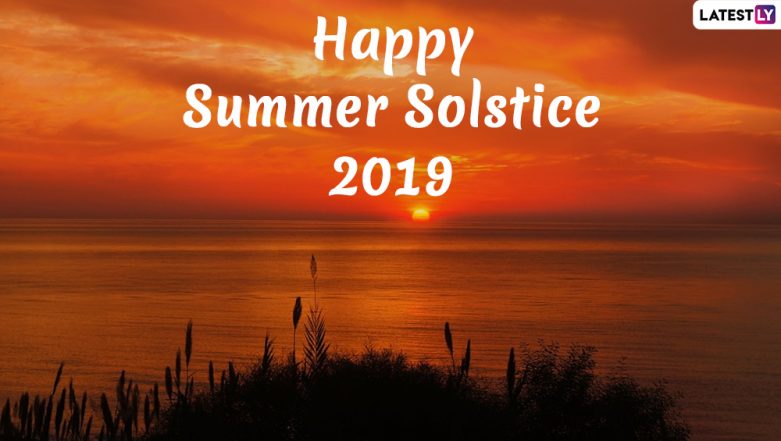 June 21 the longest day of the year for those living in the northern hemisphere as it marks the Summer Solstice 2019. Also known as June Solstice, the day marks a seasonal change, rather the beginning of summers in the northern part of the world. Summer Season 2019 begins after the Summer Solstice, a day at which the sun is at the highest point in the sky from our planet. On this day, people have started sharing beautiful pictures of the summer sun. People from various parts of the country are sharing the first sunrise of summer 2019 on their social media. People are also exchanging good wishes and sending Happy Summer greetings to each other. Summer Season 2019 Google Doodle: Search Engine Marks The Summer Solstice in Northern Hemisphere.

While this day is the longest day for the people of the Northern hemisphere it is likewise the shortest day for those in the southern hemisphere. The date of Summer solstice doesn't change mostly but it depends on the calendar too. It is decided based on the earth's tilt towards the sun, which is approximately at 23.5 degrees. The summer solstice is marked with great enthusiasm in some parts of the world, especially at Stonehenge in England. Summer Solstice 2019 Date: Know Everything About the Longest Day of The Year.

Check Pictures of Sunrise on The Longest Day of The Year

Finally, the Sun rose. From Glastonbury to the world, happy Solstice. #SummerSolstice pic.twitter.com/vXrsUBoRcn

Up early , to run up Cherhill downs to see the solstice sunrise #SummerSolstice #FridayMotivation pic.twitter.com/5ZWbX8Ayq1

You better believe it... SUMMER is here! 😎☀️

NEWS: Crowds have gathered at #Stonehenge this morning to watch the sun rise and celebrate #SummerSolstice - the longest day of the year. (Photos: @blairkpercival and @KatrinaMcEvoy) #SummerSolstice2019 pic.twitter.com/fqDA8rbak1

Not what I was hoping for as the sky went a bit flat but Solstice Sunrise at Saltburn. #SummerSolstice2019 #yorkshire #saltburn @GazetteBoro @gazetteinwhitby pic.twitter.com/SX5Dn2uoh1

Worth waking up early to go watch the sunrise this morning with my daughter. What a lovely start to the day.#SummerSolstice2019 #simplepleasures #sunrise #earlymorning #yorkshirelife #ilkleymoor pic.twitter.com/RQJHjc8vMh

A beautiful video of a sunrise

Dawn this morning on the #SummerSolstice2019 @Ely_Cathedral #LovEly #Cambridgeshire #sunrise #dawn #DayBreak #sonyA6000 #SonyAlpha #Sony I have speeded it up a little! 🙂 pic.twitter.com/QSMKklp5vt

The sunrise is sure painting a beautiful picture everyone and people are excited to welcome seasonal change. People are ready to bask in the summer shine. We too wish you have a wonderful summer filled with the sunshine of joys and happiness. Happy Summer Solstice 2019!