International Plastic Bag Free Day 2021: From Bangladesh, India to California, Here are a List of Countries That Have Banned The Use of Plastic Bags

Plastic takes up to 500 years to disintegrate, ergo the discarded plastic bags end up in landfills, oceans and threatens the life of many living organisms inhabiting our ecosystem. To combat this environmental issue here is the list of countries that have banned the use of plastic bags. 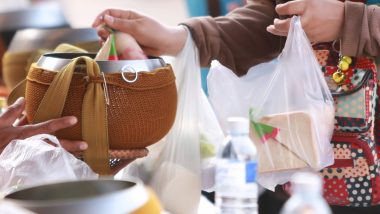 International Plastic Bag Free Day, celebrated on July 3 every year across the world to raise awareness of the harmful effects of plastic on the environment and aim to eliminate the use of plastic bags. Plastic bags is one of the leading causes of pollution in the world. Single-use plastic used to bag up groceries in stores has irreparable damage to the environment.  Plastic takes up to 500 years to disintegrate, ergo the discarded plastic bags end up in landfills, oceans and threatens the life of many living organisms inhabiting our ecosystem. Plastic bags have a notorious reputation for being confused with jellyfish, and they get eaten by sea turtles. In 1997, researcher Charles Moore discovered the Great Pacific Garbage Patch where an insurmountable amount of plastic was accumulated in the ocean. However, it took years for countries to finally notice the insidious nature of plastic bags. In 2002, Bangladesh became the first country in the world to ban single-use plastic bags after it was discovered that they clogged drainage systems during floods. Over the years, many countries have clambered on the wagon. Here is the list of countries that have banned the use of plastic bags.

Several countries across the world have completely eliminated the usage of plastic bags or have taxed their citizens.

Africa: Africa joined Bangladesh in eliminating the use of plastic bags in 2003. Since then more than 15 countries including  Kenya, Mali, Cameroon, Tanzania, Uganda, Ethiopia, Malawi, Morocco, South Africa, Rwanda and Botswana have all banned it or taxed people for using it.

Asia: In Asia Bangladesh, Cambodia, Hong Kong, India, Indonesia, Malaysia, and Taiwan. have all either eliminated the use of plastic bags or have had taxes in place to discourage its use.

Europe:  In 1994, Denmark was the first country to begin charging a tax on plastic bags. This reportedly halved the use of plastic bags from 800 million to 400 million. Other countries to have banned or taxed them are Ireland, England, Italy, Wales, Scotland and Germany.

While these countries have put measures in place to eliminate the use of plastic bags, other countries have yet to adopt measures that will strive toward protecting this environment. Australia for example has yet to take action against the use of plastic. However, certain places like Northern Territory, South Australia, and Tasmania. started to ban the insidious practice.

(The above story first appeared on LatestLY on Jul 02, 2021 12:45 PM IST. For more news and updates on politics, world, sports, entertainment and lifestyle, log on to our website latestly.com).