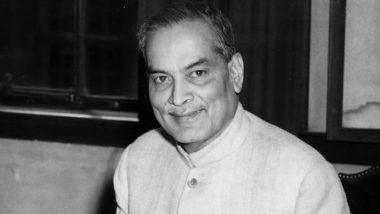 Every year, July 1 is observed as National Doctors' Day in India in honour of Dr Bidhan Chandra Roy's birth anniversary (which is incidentally also his death anniversary). He was the second Chief Minister of West Bengal and also dedicated his life to the profession of medicine. He was born on Jule 1, 1882 and died on the same date in 1962. National Doctors' Day 2020: History, Significance of the Day in Honour of Dr Bidhan Chandra Roy.

Roy was an eminent physician, educationist, freedom fighter, philanthropist and politician. He is often considered as the Maker of Modern West Bengal. He is one of few people who had obtained Fellowship of the Royal Colleges of Surgeons (FRCS) and Membership of the Royal Colleges of Physicians of the United Kingdom (MRCP). Due to his extensive contribution, he was awarded Bharat Ratna on February 4, 1961. National Doctors’ Day 2020 Wishes & HD Images: WhatsApp Stickers, Happy Doctor's Day Messages, GIFs and Facebook Greetings to Thank and Honour the Frontline Warriors.

Every year, National Doctors' Day is observed in India to create awareness about the works done by doctors. Currently, doctors are the frontline workers in the fight against the novel coronavirus infection. This day is meant to recognise and appreciate their efforts in saving lives.

(The above story first appeared on LatestLY on Jul 01, 2020 08:00 AM IST. For more news and updates on politics, world, sports, entertainment and lifestyle, log on to our website latestly.com).