Navratri 2019 Celebrations in India: From Durga Puja in West Bengal to Mysore Dasara in Karnataka, Know How Different States Worship Goddess Durga Across The Country 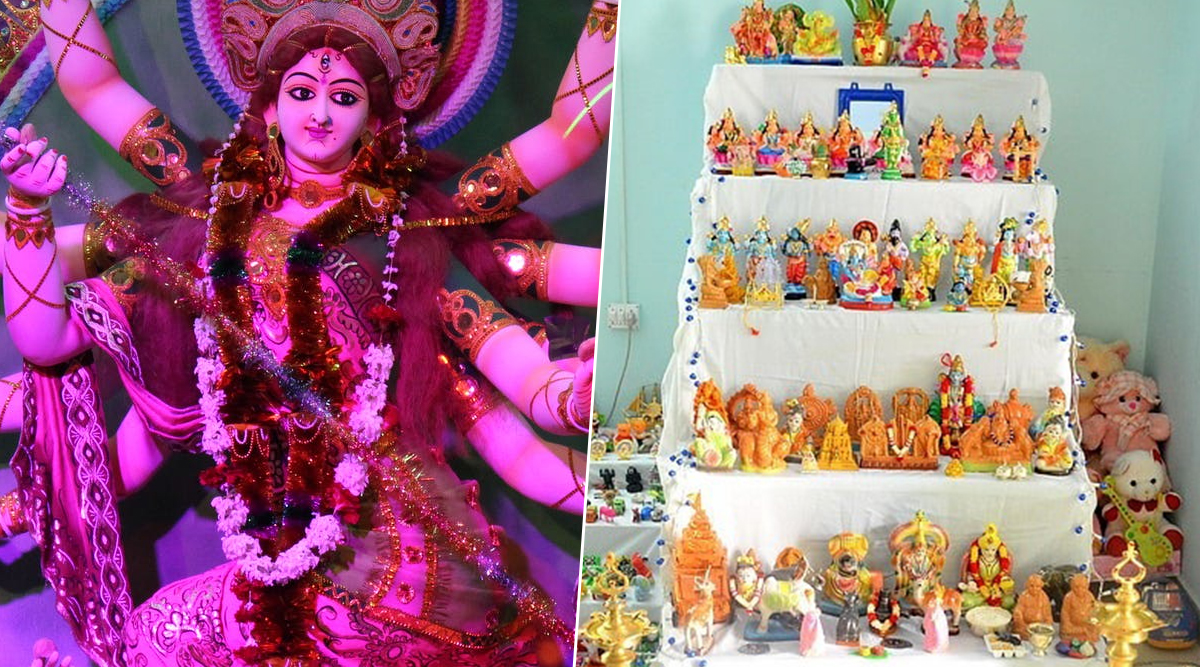 India is rightly called the land of festivals. Thanks to so many cultures and traditions coexisting together, each festival gets celebrated in varied ways in the country. The festival of Navratri, which worships Goddess Maa Durga, will be celebrated since today. Starting September 29, Navratri will go on for the next nine days, worshipping each form of Goddess Durga. The festival will conclude with another festive occasion of Dusshera or Dassera on October 8 this year. While the entire nine-night festival is more commonly known as Navratri, there are different celebrations like Durga Puja, Golu, Mysore Dasara, Bathukamma which take place in different states all over the country.

Each state has its own set of ways and tradition to ring in the festivities for any occasions. Due to the multi-religious cultures, the names and beliefs also differ from place to place. The essence of worshipping forms of Maa Durga, however, remains the same. At some places, not all nine days are marked, but the last day of Dashami or Dasara is marked in great enthusiasm. In this article, we tell you about five different ways in which Navratri celebrations take place across India. Navratri 2019 Colours List for Nine Days: Complete Colour Chart to Celebrate a Sharad Navratri With Dates and Day-Wise Navdurga Puja.

Navratri in Gujarat With Garba-Dandiya

A post shared by Chronicles of Ahmedabad (@chroniclesofahmedabad) on Sep 27, 2019 at 2:34am PDT

One of the most enthusiastic celebrations of nine nights of Navratri is seen in the state of Gujarat. It is one of the most popular celebrations followed by people of the Gujarati community. Other than the worship of Goddess Durga, they also have a traditional song and dance routine of Garba and dandiya. Garba is performed before the worship of the Goddess and Dandiya is played with sticks later. It is a part of the merriment that takes place in the festival. People travel all the way to this state to be a part of the Garba Dandiya celebrations here. Easy Garba Dance Steps for Beginners: Ahead of Navratri 2019, Watch Video Tutorials to Learn Basic Garba Steps.

The festival of Durga Puja is majorly celebrated during the last four days of the Navratri. But the celebrations go on for all days, starting with Mahalaya. Mahalaya is the day when people pray and worship the Goddess, inviting her to descend on the planet Earth. Durga Puja 2019 will be marked from October 4 to October 7 followed by the grand immersion of Maa Durga idols on October 8. The festival revers the victory of Goddess Durga over the evil demon king Mahishasura. Durga Puja celebrations have their own vibe with enthusiasm. There is a large feast, smaller events and celebrations within these days.

The celebrations of Navratri in state of Maharashtra are very similar to that in Gujarat. Women keep a fast for nine days and pay their respects to the Goddess. Many households get in an idol of Goddess Durga and perform traditional worship. They also match their clothes with the dedicated colours of each day of Navratri. Over the years, the traditions of playing garba-dandiya have become popular in the state as well.

Golu or Navratri Kolu is the festive display of dolls and figurines done in some Southern states of India during Navaratri. It is celebrated prominently in the state of Tamil Nadu and is often known as Bommai Kolu. The doll festival typically takes place around the Dasara and Vijayadashmi days of Navratri celebrations elsewhere. People decorate their house altars with a display of dolls in a specific way to depict scenes from mythological stories like Ramayana, the Puranas, Dashavataram. These are figurines of gods and goddesses and miniatures of animals, children, food which are displayed in a manner.

While all other states mark the last day of Navratri as Dusshera, in Karnataka, there is a 10-day celebration of Mysore Dasara. Called as Nadahabba in the state, it celebrates the same idea of the victory of good over evil. It was the day in the Hindu legends when Goddess Chamundeshwari (Durga) killed the demon Mahishasura. The same demon has given the name to the city of Mysuru. So it is a grand occasion in the city. The celebrations have been observed since the 15th century BC so the grandeur and the traditional approach is intertwined well here.

These are some of the many ways in which Navratri celebrations take place in the country. Other than the above-mentioned celebrations, in Delhi, there is a Ramlila celebration during Dusshera. A festival of Bathukamma is marked in Telangana and some parts of Andhra Pradesh during the days of Navratri. People worship Goddess Gauri, who is known as Bathukamma in the state. It starts with Mahalaya Amavasya (Pitru Amavasya) and ends with Durga Ashtami. So the celebrations differ from place to place and it is one of the most interesting ways a festival is marked in the country. We hope you have a happy celebration for the oncoming nine days. Happy Navratri!