Ratan Tata 83rd Birthday: Motivational Quotes and Sayings by the Renowned Industrialist & Philanthropist That Will Inspire You to Succeed

Tata Sons' Chairman Emeritus Ratan Tata celebrates his 83rd birthday on December 28. He is well known for his business ethics and philanthropy. On his special day, here are some motivational quotes by the industrialist. 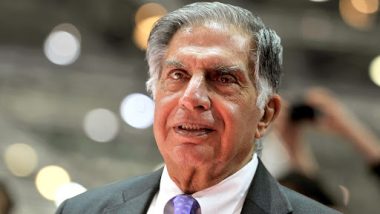 Mumbai, December 28: Ratan Tata turned 83-year-old on Monday, December 28, 2020. Known to be one of the most successful industrialists in India, Tata group saw an upward trend during his tenure. The former chairman of Tata Sons is well-known for his business ethics and philanthropy. If you are looking for top quotes and sayings of Ratan Tata, then you can find them here. Ratan Tata Honoured with 'Global Visionary of Sustainable Business and Peace' Award.

Born on December 28, 1937, in Mumbai to Naval Tata and Sonoo, he studied at Campion School till the 8th Class. He did his graduation from Riverdale Country School in New York City in 1955. In 1959, Tata then received a degree in Architecture from New York's Cornell University.

Ratan Tata joined Tata Group at the mere age of 24 in 1961. He was initially a shop floor employee of Tata Steel and went on to become the chairman of Tata Sons after JRD Tata stepped down. On his 83rd birthday, here are some motivational quotes by the industrialist.

The industrialist is also a leading philanthropist in India. The chairman emeritus of Tata Sons has donated immensely in the fields of education, medicine and rural development over the years. In 2010, Tata Group companies and Tata charities supported the construction of an executive center at Harvard Business School by donating USD 50 million.

For his great contribution to the business sector and philanthropic work, Tata has been recognised with various honours and awards, including the Padma Vibhushan, the second-highest civilian award. As Ratan Tata celebrates his 83rd birthday, we at LatestLy wish his good health and all the luck for his future endeavours.

(The above story first appeared on LatestLY on Dec 28, 2020 07:15 AM IST. For more news and updates on politics, world, sports, entertainment and lifestyle, log on to our website latestly.com).