Sharad Purnima Kheer Recipe For Kojagiri Purnima 2019: Significance and Benefits of Special Amrit Kheer One Must Have This Festival (Watch Video)

The most important part of this auspicious day is when the moon rays that come from the moon and touch the earth. The rays, on this day, is said to have tremendous healing powers and that moon rays on the day of Sharad Purnima drip nectar. Many people eat a special type of kheer on this day that is said to heal the body and soul with its energy derieved from the moon. 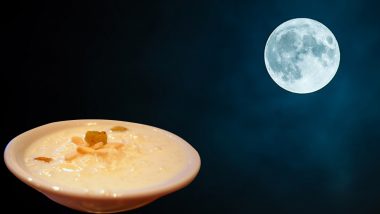 Happy Sharad Purnima 2019 to everyone. the special day is celebrated with great enthusiasm amongst the Hindu devotees. The day is very important in Panchanga (the Hindu calendar) because amongst all the other Purnimas celebrated throughout the year, Sharad Purnima also known as Kojagiri Purnima is considered the most auspicious one. The devotees would be observing this harvest festival on October 13, 2019. Sharad Purnima Kheer for Kojagiri Purnima 2019 falls under one of the very few auspicious dishes. This day holds immense importance in the Hindu community as on this day, the moon beautifully rises with 16 qualities, making it a mesmerising sight to the eyes as well. Sharad Purnima is celebrated with Amrit kheer, the significance and benefits of which will surprise you. As per Hindu belief, each of the qualities of the moon is associated with humans and their ways of life. And on this day the moon forms an example of a perfect human personality. The day is considered auspicious for various reasons. While the moon is worshipped on this day religiously with various rituals. Maa Lakshmi and Lord Vishnu are worshipped too with people offering prayers. Sharad Purnima 2019 Wishes in Hindi: WhatsApp Stickers, Kojagiri Purnima GIF Image Messages, Quotes and SMS to Send Lakshmi Puja Greetings.

According to another legend, Sharad Purnima also known as Kojagiri Purnima is considered to be the day when Lord Krishna performed Maha-Raas which means the dance of divine love. The back story suggests that on this night, the Gopis of Vrindavan lured to Lord Krishna's flute and danced with Krishna throughout the night. In Brij and other parts of North India, Sharad Purnima is also known as Raas Purnima. According to Hindu mythology, Lord Krishna was born with all 16 Kalas, and he was the complete incarnation of Lord Vishnu. Kojagari Lakshmi Puja 2019 Date & Time in Bengal: Know Sharad Purnima Shubh Muhurat and Significance of Kojagori Lokkhi Puja.

However, the most important part of this auspicious day is when the moon rays that come from the moon and touch the earth. The rays, on this day, is said to have tremendous healing powers and that moon rays on the day of Sharad Purnima drip nectar. Many people eat a special type of kheer on this day that is said to heal the body and soul with its energy derieved from the moon.

What Is Sharad Purnima Kheer?

As per the Hindu mythology and beliefs, the legends say that in the midnight of Sharad Purnima nectar drizzles on earth via the sixteen arts of the moon. These nectar drops turn into dew particles. So people keep a bowl of kheer for the nectar to drop in it. The kheer is then eaten as prasad on this day. It is said that the kheer becomes Amrit (divine potion)

We cannot clearly say if the kheer with added dew has any health benefits. However, kheer per se, can actually be healthy for you. Not only does it have fewer calories, but it also offers 4 grams of protein. You also get vitamin A and vitamin C with the combination of healthily made kheer.  Also, it's a good source of calcium and low in cholesterol. The combination of rice, milk, dry fruits and sweetener when made with low-fat milk and non-refined healthy sources of sugar like jaggery, dates, etc., is considered a tasty weight loss treat.

Kheer is a dessert made with different ingredients you can use rice, tapioca, vermicelli or even broken wheat. However, on this day the traditional rice kheer is made.  To add flavours, you can add certain spices, such as cardamom and cinnamon along with dry fruits. Married women also fast on Sharad Purnima. The fast, called 'Kamuti Vrat' is believed to fulfil all the desires. The bright moon and clear sky on Sharad Purnima are a symbol of the complete departure of the monsoon.

(The above story first appeared on LatestLY on Oct 13, 2019 04:06 PM IST. For more news and updates on politics, world, sports, entertainment and lifestyle, log on to our website latestly.com).