Surdas Jayanti 2022 Date, Shubh Muhurat & Significance: How To Celebrate Sant Surdas Jayanti? Everything To Know About the Lord Krishna Devotee 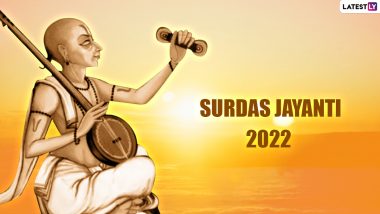 Surdas Jayanti is celebrated today. Poet Surdas was born in 1478 AD in a Brahmin family in Runakat village. Krishna devotee Surdas' birth story has various mythological stories. It is said that once Surdas was so immersed in the devotion to Lord Krishna that he fell into a well, after which Lord Krishna himself saved his life and restored the light of his eyes. When Lord Krishna, pleased with his devotion, asked him to demand a boon, he asked to be blind again because he did not want to see anyone other than Lord Krishna. The devotional songs of the great poet Surdas fascinate everyone and his poems are famous far and wide. May 2022 Holidays Calendar With Major Festivals & Events.

It is believed that even the Mughal emperor Akbar praised his skill in poetry. He survived on financial donations from the people and also gave religious lectures to the people. He is considered to be the eighth gem of the eight seals of the Vallabh sect. The birth anniversary of Sant Kavi Surdas Ji is celebrated in North India as devotees of Lord Krishna worship him and also fast in his honour. Many poetry competitions and music sessions are held on this day. Since Lord Krishna was brought up in Vrindavan, this day is celebrated with much fanfare to remember Surdas in this special place.

Surdas was said to have the art of singing as a boon. In a few days he started living at Gaughat near Agra. Here he soon became famous as Swami. It was here that he met Vallabhacharya Ji. He initiated the path of confirmation and made people see the leelas of Sri Krishna. Vallabhacharya assigned him the responsibility of Lilagan in the temple of Shri Nath Ji which he continued to perform till his death. It is believed that Surdas once received a vision of Lord Krishna. It is said that when Surdas met Vallabhacharya, he became his disciple and they started singing Krishna's leelas. While praising Lord Krishna, he created important compositions like Sur Sagar, Sur Saravali, and Sahitya Lahari which exist today. It is believed that Sri Vallabhacharya Ji was the guru of Surdas Ji and the one who inspired Surdas Ji to devote his life to Lord Krishna.

(The above story first appeared on LatestLY on May 05, 2022 11:30 AM IST. For more news and updates on politics, world, sports, entertainment and lifestyle, log on to our website latestly.com).