International Albinism Awareness Day 2019: Theme, History and Significance of the Day to Celebrate People With the Congenital Disorder

With a simple observance on June 13, the United Nations aims to spread a better understanding of the congenital disorder called albinism. 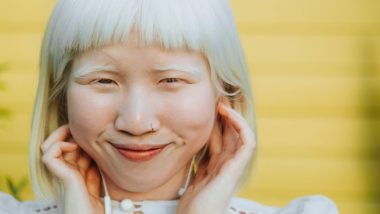 Albinism as a condition is poorly understood by society. Many societies believe that people with albinism are cursed by the gods. Even in recent years, in the age of information, instances of violence against people living with the condition have been recorded because it's believed that their body parts hold magical powers. To dispel myths about albinism, to reduce stigma, to create better awareness and to reduce violence against people with the condition, the United Nations celebrates International Albinism Awareness Day on June 13 every year. The day came into effect from the year 2015 to commemorate the UN's first resolution to promote and protect the rights of people living with albinism. This year's theme for International Albinism Awareness Day is "Still Standing Strong."

Albinism is a congenital condition in which the skin doesn't produce melanin. As a result, people with the disorder often have pale white skin, hair and eyes. Without melanin, which protects the skin from the harsh effects of the sun, the person becomes more vulnerable to UV rays. And is at a greater risk for skin problems such as cancer. Kim Kardashian West Reveals She Has Psoriasis: 10 Natural Remedies to Treat the Skin Disease at Home!

The theme of International Albinism Awareness Day 2019 "Still Standing Strong" acknowledges the hardships faced by people living with the condition. It aims to show solidarity for their cause and to applaud their bravery for fighting stigma, discrimination and misconceptions.

It recognises how people with albinism face human rights violations on an everyday basis and how they face obstacles in obtaining health facilities, education and job opportunities. It's a call to stand tall despite all the challenges.

The rising number of attacks against people with albinism prompted a need to create better awareness. People with the condition were attacked and killed because the perpetrators believed their body parts would give them magical powers.

The Tanzania Albinism Society and other organisations started to campaign for a day for people with albinism with a view to put an end to the rising instances of violence against them. The first 'Albino Day' was celebrated on May 4, 20006. And from 2009 onwards, the day was renamed as 'National Albinism Day.'

The Canadian NGO Under the Same Sun backed Yusuf Mohamed Ismail Bari-Bari, the UN Ambassador of the Mission of Somalia to rally for human rights of people with albinism. The Human Rights Council adopted its first resolution on albinism on June 13, 2013.

Significance of the Day

The day is a small step to reduce some of the stigma faced by people living with albinism. It attempts to educate people about how those living with the skin condition isn't any different from others. With a simple observance on June 13, the United Nations aims to spread a better understanding of the congenital disorder.

Like every year since 2015, even on International Albinism Awareness Day 2019, regional ambassadors will organise events to create awareness and appreciation.

(The above story first appeared on LatestLY on Jun 13, 2019 08:07 AM IST. For more news and updates on politics, world, sports, entertainment and lifestyle, log on to our website latestly.com).