Mermaid Baby Born in Hyderabad Dies Withing Hours: What Is 'Mermaid Syndrome'? Everything You Want to Know About Sirenomelia

A mermaid baby was born in Hyderabad's Petlaburj Maternity Hospital and unfortunately couldn't survive for long after birth. The baby died within hours of being born because of the critical birth defect. The rare congenital condition called mermaid syndrome. 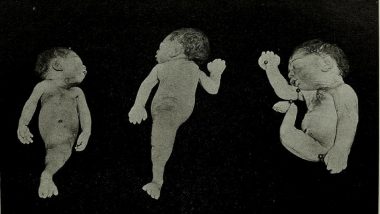 A mermaid baby was born in Hyderabad's Petlaburj Maternity Hospital and unfortunately couldn't survive for long after birth. The baby died within hours of being born because of the critical birth defect. The rare congenital condition called mermaid syndrome is quite rare but some of the cases have been seen in the past few years, in most of which the babies haven't survived long after birth. The baby was born in the shape of the mythical creature "mermaid" which is often characterised as half-human, half-fish features. The top body looks like that of a human and the lower half, instead of two legs, it seems like there is a fin very similar to a fishtail.

The are congenital developmental disorder known as Sirenomelia or Mermaid Syndrome. "The baby was born around 19:00 on Wednesday and died within the next two hours. Such babies are extremely rare," said hospital doctors to CNN. Doctors also said that it is possible that the defects were not detected before making the case more complicated.

What Is 'Mermaid Syndrome'?

Sirenomelia (mermaid syndrome) is a type of birth defect in which both the legs of a child are connected. It looks like mermaid fish, hence it is also known as Mermaid Syndrome. This syndrome occurs in one in a million children. No specific reason for Sirenomelia (Mermaid Syndrome) has been revealed so far. It is due to a birth effect but genetic and environmental factors are included behind it. It has also been speculated that this may be due to gene transfer from one person to another. Circulatory systems and blood vessels may also be abnormal in some cases.

In this case, the baby is born with a complete fusion of the bones along with an absence of genitals, gastrointestinal disorders, disorders in the spine, pelvis and even the absence of both kidneys. According to the NCBI, this condition is usually deemed unfit or incompatible with life owing to several visceral abnormalities. However, a report indicates that there are actually a few surviving infants.

A baby was born in 2018 with the same condition at the Swami Ramanand Teerth Rural Government Hospital at Ambajogai in Maharashtra. Like the Hyderabad baby, the infant too died within just 15 minutes of being born. In 2017, a 23-year-old woman gave birth to a baby with its legs fused or the mermaid syndrome. The baby’s sex could not be identified owing to its fused limbs. It lived for four hours.

(The above story first appeared on LatestLY on Mar 12, 2021 08:26 PM IST. For more news and updates on politics, world, sports, entertainment and lifestyle, log on to our website latestly.com).