World Rabies Day 2020 Myths and Facts: From Transmission to Vaccination, Misconception That MUST Be Put an End To 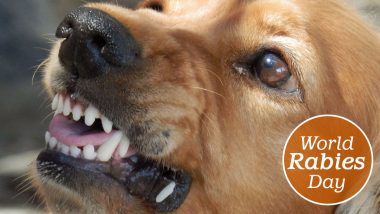 Every year, September 28 is observed as World Rabies Day. The aim of this day is to raise awareness about prevention from rabies and to highlight the aim to defeate the fatal disease. On this day the anniversary of Louis Pasteur's death is observed too. He was the French chemist and microbiologist who has been credited with developing the first rabies vaccine. Apart from tools eliminate human deaths from rabies, prevention methods and spreading awareness it is important to curb misinformation and drown the myths related to the disease.

However, before we head to the myths and facts related to the disease let's discuss what exactly the disease is. It is a virus that is spread to humans via the saliva of infected animals with fatal consequences. Usually transmitted through an animal bite, for example, from stray dogs, the disease can kill people. Common symptoms of the disease include fever, headache, excess salivation, muscle spasms, paralysis and mental confusion. Now to understand the disease better, let's bust some myths related to Rabies:

Myth: Is Rabies only transmitted by the bite of an animal?

Fact: While the most common way of transmission is the bite of a rabid animal a scratch by a dog or an animal can also be one of the reasons. There is a possibility of airborne transmission of rabies as well.

Myth: Rabies is not life-threatening or fatal to humans.

Fact: Rabies is ALWAYS life-threatening and can result in death if the bite wound is not washed immediately and

the post-exposure vaccination is not given

Myth: Ifbitten by a vaccinated dog, is a post-exposure human rabies vaccine needed?

Fact: Even if the dog is vaccinated against rabies, you should still go to the doctor for consultation. The doctor

will evaluate the bite wound and advise

Myth: Is human-to-human transmission of rabies not possible?

Fact: Theoretically, human-to-human rabies transmission is possible since we're mammals. However, no lab-tested caseso have confirmed.

(The above story first appeared on LatestLY on Sep 28, 2020 07:50 AM IST. For more news and updates on politics, world, sports, entertainment and lifestyle, log on to our website latestly.com).