Madras Day 2019: Marina Beach to Vandalur Zoo, These Are Some of The Best Places to Visit in Chennai 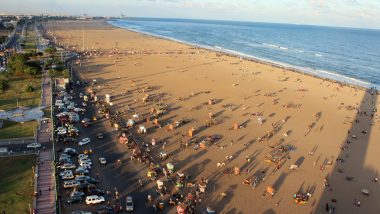 Madras Day which celebrates the founding of the city of Madras in Tamil Nadu is marked on August 22. The capital of Tamil Nadu, it is the biggest cultural, economic and educational centre of South India. On August 22, 1639, the village of Madraspatnam or Chennapatnam was purchased by the East India Company from the viceroy of the Vijayanagar Empire. The city was rechristened to Chennai in 1996. The first celebrations of Madras Day focus on its history, past and present. There are various events like heritage walks, exhibitions, poetry reading, public performances which celebrate the idea of the birth of the city. Today, Chennai is among the most visited Indian cities by foreign tourists. In the year 2015, it ranked 43rd among the most-visited cities in the world. So let us see some of the popular tourist spots in the city which attract so many tourists. From Munnar to Ladakh, Some Places to Visit in Monsoon in India and How to Reach There.

Chennai's Marina beach ranks for being the world's second-longest natural urban beach in the world.  Running along the Bay of Bengal for a stretch of six kilometres, it is among the most visited and crowded beaches in the country. During the summer months, almost 15,000-20,000 people are said to visit the beach. So one just cannot miss these places to see in the city.

Fort St. George: Founded in 1644, Fort St George is significant for being the first English fortress in the country. This fort thus played a part in history, serving an impetus to trading activities. On the present day, this fort has the Tamil Nadu legislative assembly and other official buildings. The fort has been through wars and conflicts including the WWI.

More popularly known as Besant Nagar beach, it is the endpoint of Marina beach shore. It is named after Edward Elliot, onetime chief magistrate and superintendent of police, Madras. One of the prominent landmarks here is Karl Schmidt Memorial. It is one of the cleanest and safest beach in the city and thus extremely popular among the visitors. It is good for playing and swimming along the coast.

Government Museum: Located in the neighbourhood of Egmore, this is a rich museum in archaeological collections. It is the second oldest in India with a great collection of Roman antiquities. There is also a National Art Gallery within the premises which exhibits works of some great artists. There is also a huge theatre hall which staged English plays attended only by the elite. It has seen one of the plays of Shakespeare too.

This is the 17th-century temple of Lord Shiva located in Mylapore. Among the most impressive temple structures in the city, it gives a glimpse into Tamil culture. If you love observing ancient architecture then this temple serves a mix of two styles - Dravidian and Vijaynagari.

Madras Crocodile Bank Trust: The Madras Crocodile Bank Trust and Centre for Herpetology is a reptile zoo and herpetology research station. It is also the first crocodile-breeding centre in Asia. They aim to save three Indian endangered species of crocodile—the marsh or mugger crocodile, the saltwater crocodile and the gharial. The centre has been involved in conserving not only crocodiles but also Olive Ridley Turtles. It is open for safari rides, so you can get a good glimpse of wildlife.

The Arignar Anna Zoological Park (AAZP), also known as Vandalur Zoo is known for its excellent conservation of rare and endangered species of flora and fauna. One of the points of pride of the state of Tamil Nadu, the zoo attracts over 20 lakh visitors from across the country. It happens to be one of the first zoos formed in the country. It houses over 1,500 wild species, which include 46 endangered species of mammals, birds, reptiles, and insects.

Chennai has a lot of places which have great historical value to them. From the first museums to the oldest zoo in the country, Chennai has a bit of everything for tourists, whether you are a beach lover or a wildlife enthusiast.

(The above story first appeared on LatestLY on Aug 22, 2019 09:00 AM IST. For more news and updates on politics, world, sports, entertainment and lifestyle, log on to our website latestly.com).