Dog Runs Away With a GoPro and The Footage is Going Viral, Watch Video

The footage shows the dog too enthusiastic about the device and is running away from the owner who is trying to retrieve it. Along with the dog who is holding the camera there are others dogs in the footage too. 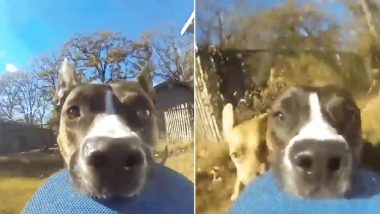 Dogs are adorable whatever they do. Watching dog videos can make you smile if you are having a dull moment. And with so many cute videos of dogs coming up every day, you can never really get tired of watching them. A few days back the #WhatTheFluff challenge was going viral, which also gave us a bunch of dog videos to look and admire. A new video of a dog running with a GoPro camera is going viral over the internet. It has got over 2.1 million views and it is so hilarious that you'd want to watch it over and over again.

The footage shows the dog too enthusiastic about the device and is running away from the owner who is trying to retrieve it. Along with the dog who is holding the camera there are others dogs in the footage too.

Take a look at the footage of GoPro stolen by a dog:

The dog seems to be really enjoying his run right? It looks quite a good effect with the GoPro camera right in its face. The other dogs too seem to be enjoying the run. The video has been garnering many views on all social platforms. Some people have even edited it and added a sound effect to make it look nicer.  This Dog Accidentally Howled Like Britney Spears’ ‘Toxic’ Tune and Twitter Is Going Crazy! Watch Funny Video.

Take a look at the edited video:

I added the 'Bennie Hill' theme music on top of that magical doggie Go Pro video, and now it's a billion times more magical! 🔥😍🤡 pic.twitter.com/pEUBYhNYgo

GoPro has got a stunning model

GoPro needs to use this in a commercial, it’s hysterical 🤣

Best use of a GoPro...Ever!

This is sure a funny video and with the music, it looks amazing. Maybe GoPro has actually got an endorser. Among so many dog videos on the internet, this too makes a cute addition to them.

(The above story first appeared on LatestLY on Jul 30, 2018 04:12 PM IST. For more news and updates on politics, world, sports, entertainment and lifestyle, log on to our website latestly.com).