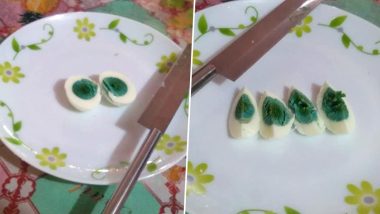 Eggs with green yolk? Is it the aliens? Twitter is going berserk over weird eggs that have gree yolk. And not just one but about six hens in a poultry farm in Kerela laid eggs with green yolks and people cannot comprehend what exactly is happening. A K Shihabudheen who resides in Othukkungal, Malappuram in Kerala owns the poultry farm where the hens began to lay eggs with green yolks. Videos and pictures of both raw and boiled eggs with green yolks have left netizen scratching their heads. People have been speculating to find out what could be the reason behind this. This bizarre phenomenon has made Shihabudheen quite popular though. Soon after the photos and videos of the eggs went viral, a lot of people started contacting Shihabudheen asking him the reason behind the occurrence. However, as the curiosity spiked, scientists from the Kerala Veterinary and Animal Sciences University (KVASU) began studying these special hens and the eggs some time ago, as per The New India Express. Hundreds of Chicks Hatch from Spoiled Eggs Swarm in a Landfill; Watch Viral Video.

The first thing that experts doubted was the hens' diet because maybe just like in humans our diet has a role to play in determining the colour of our stool, something similar may have happened with the hens too. It started nine months ago when Shihabudheen found that an egg laid by one of his hens had a green yolk. They didn't eat the egg because they were worried if at all it was safe to consume the egg. However, soon the new hens began laying green eggs too and soon the pictures and video flooded social media. Check out this video:

Experts from Kerala veterinary and animal sciences university (KVASU) who were researching the strange occurrence found out what made the eggs have green egg yolk. The study found that it was indeed the diet of the birds that caused this. “When we gave the feed prepared at the university to the hens, they started laying eggs with yellow-coloured yolks,” said Dr S Sankaralingam of the university and later the poultry farm owner told them that he would mix herbs and plants with the food for the birds which caused the colour of yolk to turn green. Interesting isn't it?

(The above story first appeared on LatestLY on May 28, 2020 06:56 PM IST. For more news and updates on politics, world, sports, entertainment and lifestyle, log on to our website latestly.com).