After the news broke that Twitter's board had agreed to accept Tesla CEO Elon Musk's offer to buy the company, the micro-blogging site has been flooded with reactions and memes. 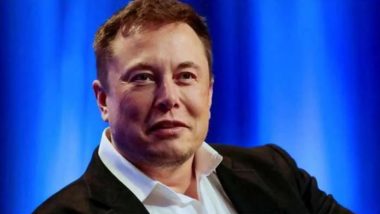 San Francisco, April 26: After the news broke that Twitter's board had agreed to accept Tesla CEO Elon Musk's offer to buy the company, the micro-blogging site has been flooded with reactions and memes. Elon Musk Buys Twitter: 'Elon Is the Singular Solution I Trust', Says Former CEO Jack Dorsey.

The Tesla CEO's acquisition of Twitter has received a mixed reaction from Twitterati.

"Elon Musk has finally set bluebird," a user wrote on the micro-blogging platform.

According to reports, there were more than 200,000 Google searches for "Elon Musk Twitter" on Monday.

"Remember that time @elonmusk told #unitednations that if they could prove they could end world hunger with $6 billion that he would donate it, so they gave him a detailed breakdown and he did not donate the money but then bought Twitter for $45 billion so he could add an edit button?" a user tweeted.

"Elon musk buying Twitter is not as big of a deal as some extreme accounts will make it. It is a good change though, people have the right to see opinions that contradict theirs, let the battle of ideas happen," another user wrote.

"Which banned account do you want to be restored most once @ElonMusk takes control?" a user wrote.

However, reports said that Trump has decided not to join Twitter despite Tesla CEO Elon Musk buying it, saying "Twitter has become very boring".

Trump said that he will not return to Twitter and will instead use his own 'TRUTH Social' as the only social media platform.

"I am not going on Twitter, I am going to stay on TRUTH. I hope Elon makes improvements to it and he is a good man, but I am going to be staying on TRUTH," Trump was quoted as saying in a Fox News report late on Monday. Musk has caught an elusive Twitter bird for $44 billion, as the company's board decided to give in to his takeover bid with his "best and final" offer. Twitter announced late on Monday that it has entered into a definitive agreement to be acquired by an entity wholly owned by Musk for $54.20 per share in cash in a transaction valued at nearly $44 billion. Upon completion of the transaction, Twitter will become a privately-held company.

(The above story first appeared on LatestLY on Apr 26, 2022 04:26 PM IST. For more news and updates on politics, world, sports, entertainment and lifestyle, log on to our website latestly.com).