Father-Daughter Pair Who Went Viral For Lip Syncing 'Girls Like You...' Bring in a Cuter Sequel After a Year, Watch Video

In a new video posted online, the duo is singing the same song in the same vein, this time the little girl is a year older. The way the video has been shot, the movements, the expressions are just the same and people are once again charmed by the video. 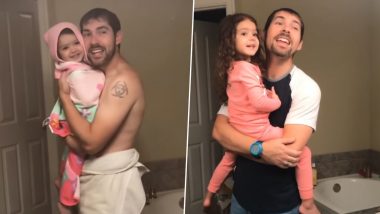 Marron 5's song Girls Like You released last year but it is popular and crooned even today. And if you remember well, then there was an adorable video of a father and his baby lip-syncing the song. The video of the father-daughter duo went crazy viral and people wanted to see more of them. Now exactly, a year later, the duo is back with the same song and giving the internet generation a much-needed sequel. In a new video posted online, the duo is singing the same song in the same vein, this time little Lyla is bigger. The way the video has been shot, the movements, the expressions are just the same and people are once again charmed by the video.

In their first video which was shared last year, the little girl was seen wrapped in a pink towel with her father holding her. Both of them looked in the mirror and sang the song, with the little one trying to perfectly lip-sync the song. Her cute smile and expressions syncing with her father melted the hearts of all viewers. Everyone wanted to see more of them and exactly a year later, they are back. This time, the girl named Lyla is dressed in a pink outfit, her hair longer and her smile even wider. In fact, the first video went so viral that it even got a parody of its own in India.

Here's The Sequel to The Adorable Video of Girls Like You...

A year ago today we posted a video not thinking a thing of it. Little did we know the magnitude and massive response it would receive. After 100’s of millions of views (literally no exaggeration) and thousands of messages received on the positivity it radiated, we decided to finally bring you guys a sweet little sequel one year later. When the whole world asks, the whole world receives❤️ @justin.wesson #sorrynotowelsthistimeguys#ohwhatadifferenceayearmakes #girlslikeyou #mylathemasterlipsyncer

People are happy that the new video is out and the video is being shared again. We do not doubt if this goes viral again. Many users have left happy comments about the father-daughter duo on their video. "This is so precious," says one comment. Another commented, "Even a year later, my heart melts again. This is so cute." The whole world asked for them and the whole world receives as they mentioned in the caption. Lyla and her father are once again going to steal hearts with their adorableness.

(The above story first appeared on LatestLY on Oct 06, 2019 04:14 PM IST. For more news and updates on politics, world, sports, entertainment and lifestyle, log on to our website latestly.com).