From 'I want to buy your iPhone' to 'You'd stop being scared of rape if I showed you my cock,' These Messages From a Buyer are Shocking

A woman who wanted to sell her iPhone had a terrific conversation with a potential buyer. The conversation escalated to being abusive very quickly. The tweet of these messages is going viral. 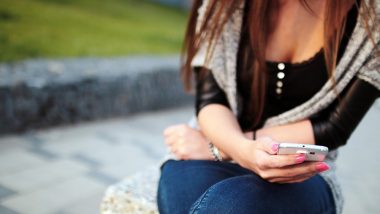 Selling and reselling your stuff online is not a novel concept. Thanks to the easy accessibility, it is rather convenient to sell off something by just putting an advert on the internet. A woman however, trying to sell off her iPhone had a horrific experience of mansplaining from a potential buyer who sought interest. The man on the other side wanted to meet her at the house and when she denied, the replies became abusive to an extent of sending her his dick pic so that she'd believe he's not a rapist! A screenshots of exchange of messages was shared on Twitter timeline and the chat is quiet shocking. iPhone User in UK Gets Messages From Pakistan From Her Stolen Mobile Asking for Her Passcode, Funny Tweet Goes Viral.

A Twitter user named Comrade Valentinya has shared someone's experience. The woman was looking to sell off her iPhone when she got a message from a person wanting to buy it. The woman asked him to meet at a Starbucks nearby but the man insisted on her house address. When she denied it, he tried to be a 'good' man blaming feminists for tarnishing the image of 'all men being bad.'

He mentioned that she shouldn't be scared to share her address with him. Meanwhile the woman wanted to keep the discussion to selling the phone and asked if he was genuinely interested in buying it. He even stated, "let me come over and you'll see I won't rape you." The user decided to not pay heed and stopped replying. This is when the guy said he would send a her a picture of his private part and she would want to get raped! Guy Tries to Mansplains the Difference Between a Vagina and Vulva to a Female Gynaecologist, Gets Trolled on Twitter.

Check the Exchange of Messages:

"Hi I want to buy your iPhone"

"I bet you'd stop being scared of rape if I showed you my cock, feminazi whore" pic.twitter.com/SNkgQlLiXC

What is shocking when the woman tried to take the matter to the police, the police said 'until he actually tries to rape her there's nothing they can do.' It barely took a few messages, when the conversation turned abusive and threatening. The man went to state how 'women ignore the nice guys.' He even asked her to die in the next set of messages. The tweet has since then got close to 10,000 retweets and 28,000 plus likes. Other women also shared their experiences of similar cases. The exchange of messages also scared other women who expressed their fear on the thread.

(The above story first appeared on LatestLY on Jul 06, 2019 08:32 PM IST. For more news and updates on politics, world, sports, entertainment and lifestyle, log on to our website latestly.com).