Guy Tries to Mansplain the Difference Between a Vagina and Vulva to a Female Gynaecologist, Gets Trolled on Twitter

His tweets are now hidden, however, the screenshots are still circulating. 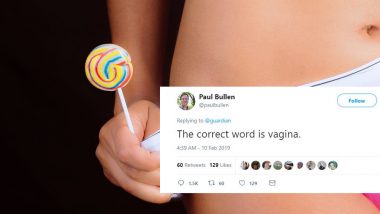 Every time we feel that men are getting a hang of mansplaining some or the other bloke proves us wrong. How difficult it is to realise that it is wrong to always explain to women about things they already know or specialise in. This MAN from Chicago called Paul Bullen who calls himself ‘editor, writer, teacher, researcher; PhD and M.A., from the University of Chicago’ proved us once again that mansplaining is here to stay. This man on Twitter went on to mansplain a female gynaecologist about the vagina and the difference between vulva and vagina. And also after all these efforts didn't work he tried to mansplain mansplaining itself. The man replied to an article about a photo series called ‘Me and my vulva: 100 women reveal all’. He tried to correct them by tweeting: "The correct word is vagina." Soon after he did this, the internet went abuzz. However, to handle the situation Dr Jennifer Gunter, a woman and also a gynaecologist had to come to the rescue.

Hi, I am a gynecologist and an international expert on both the vagina and vulva. These are vulvas. I wrote this post with a handy Venn diagram to help people separate the two! Enjoy 😉 https://t.co/nMFVeVHkya

"Hi, I am a gynaecologist and an international expert on both their vagina and the vulva," she said explaining to Paul and also attached a handy Venn diagram explaining the difference between vulva and vagina to him. She further wrote on the thread, "These are vulvas. I wrote this post with a handy Venn diagram to help people separate the two. Enjoy!" Dr Jennifer has been helping people use the correct terminology in terms of female genitalia. She also linked Paul back to a 2015 article where she wrote: “I’m sick of people forgetting the poor vulva and referring to everything in the female lower reproductive tract as vagina.”

Paul still wasn't convinced and went ahead to write a string of tweets proving himself right and that the expert was wrong. "I’m claiming the word vagina has two meanings. I’m addressing language use, not anatomy per se. To summarize, many words have both a strict meaning and broader meaning (species and genius)."

The man was in no mood to stop and exactly when even the dictionary felt that it was time to educate the self-proclaimed genius. Dictionary.com pooled it with a caption, "Well, actually..."

After the whole vagina saga, Paul decided to mansplain mansplaining itself when Dr Jennifer pointed out that Paul had done a bit of mansplaining, and she schooled him by saying "So @paulbullen here is where you mansplained to me – the correct use for the article was vulva, the common use vagina would not have applied here as it was specifically about loving vulvas and not a general lower repro tract article." However, instead of admitting his mistake, Paul chose to retaliate and went on to say, "That’s an incorrect use of the word mansplaining. Not that I want to legitimize the term, but by its own definition it requires more than just have just a man who is explaining something. Even if some in the audience are women."

No it’s not. But thanks for the mansplaining on something you obvs know nothing about.

After this, the rest of Twitter was enough to teach this man a lesson. His tweets are now hidden. No matter what the screenshots are still circulating.

(The above story first appeared on LatestLY on Feb 17, 2019 12:47 PM IST. For more news and updates on politics, world, sports, entertainment and lifestyle, log on to our website latestly.com).