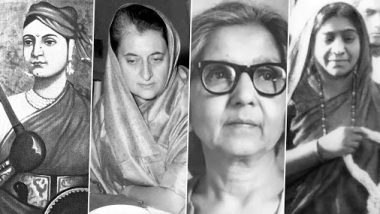 Rani Lakshmibai, popularly known as the Rani of Jhansi, was an Indian queen of the Maratha princely state of Jhansi in North India currently present in Jhansi district in Uttar Pradesh. Rani Lakshmibai was one of the leading figures of the Indian Rebellion of 1857 and became a symbol of resistance to the British Raj for Indian nationalists. From August 1857 to January 1858 Jhansi under the Rani's rule was at peace.

Aruna Asaf Ali, an Indian educator, political activist, and a publisher, was an active participant in the Indian independence movement. She became a member of Indian National Congress after marrying Asaf Ali and participated in public processions during the Salt Satyagraha. Ali was arrested on the charge that she was a vagrant and hence not released in 1931 under the Gandhi-Irwin Pact which stipulated release of all political prisoners.

Ali is widely remembered for hoisting the Indian National flag at the Gowalia Tank maidan, Bombay during a Quit India Movement in 1942. Post-independence, she remained active in politics, becoming Delhi's first Mayor.

Indira Gandhi was a central figure of the Indian National Congress and the first and, to date, only female Prime Minister of India. Indira Gandhi was actively involved in the freedom struggle. In her childhood, she founded the ‘Bal Charkha Sangh’ and in 1930, the ‘Vanar Sena’ of children to help the Congress party during the Non-Cooperation Movement. She was imprisoned in September 1942, and worked in riot-affected areas of Delhi in 1947 under Gandhi’s guidance.

Sarojini Naidu was a political activist and poet who was a proponent of civil rights, women's emancipation, and anti-imperialistic ideas. She was an important figure in India's struggle for independence from colonial rule. Naidu's work as a poet earned her the sobriquet 'Nightingale of India' by Mahatma Gandhi. She was called 'Bharat Kokila' by Rabindranath Tagore.

Naidu was appointed the President of the Indian National Congress in 1925 and later became the Governor of the United Provinces in 1947, becoming the first woman to hold the office of Governor in the Dominion of India. She became a part of the Indian nationalist movement and became a follower of Mahatma Gandhi and his idea of Swaraj.

Kalpana Datta was an Indian independence movement activist and a member of the armed independence movement led by Surya Sen, which carried out the Chittagong armoury raid on April 18, 1930. Kalpana joined the Indian Republican Army, Chattagram branch, the armed resistance group led by Surya Sen in May 1931. In September, 1931 Surya Sen entrusted her along with Pritilata Waddedar to attack the European Club in Chittagong. But a week before the attack, she was arrested while carrying out reconnaissance of the area. She went underground after her release on bail.

On February 17, 1933 the police encircled their hiding place in gairila village, and that raid Surya Sen was arrested but Kalpana was able to escape from there. She was finally arrested on 19 May 1933. In the second supplementary trial of the Chittagong armoury raid case, Kalpana was sentenced to transportation for life. She was released in 1939.

(The above story first appeared on LatestLY on Aug 14, 2020 08:32 PM IST. For more news and updates on politics, world, sports, entertainment and lifestyle, log on to our website latestly.com).