Irfan Pathan Set to Start His New Innings on Silver Screen, Here's A Look at Other Indian Cricketers Who Also Pursued Career in Acting!

Cricket and Movies are two of the most popular fraternity in India and people working in both fields are always in the limelight. In many movies like Patiala House, Azhar and MS Dhoni- The Untold Story, fans have witnessed actors playing a cricketer. While many cricketers have also tried their hand in acting and have done fairly well. 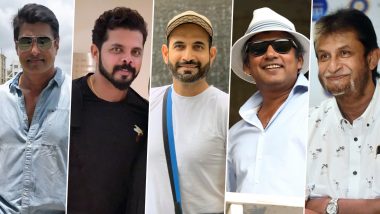 After tormenting the batsman in the cricket field, Indian pacer Irfan Pathan is all set to star in the silver screen. The latter will be making his acting debut in a South Indian film. The Ajay Gnanamuthu-directed movie will feature veteran actor Vikram aka Chiyaan Vikram. However, not much has been revealed about Irfan Pathan's role in the movie so far. Nevertheless, the cricketer is certainly excited and looking forward to starting his new innings in the acting career.  Cricket fans of the nation are also eagerly waiting to star seamer's new avatar in the film. And as one waits to watch out Irfan's acting chops, we look at other Indian cricketers who also pursued a career in acting. Yes, Irfan Pathan is not the first cricketer to star in a movie and we will be focusing on some cricketer turned actors.

Cricket and movies are two of the most popular fraternity in India and people working in both fields are always in the limelight. In many movies like Patiala House, Azhar, MS Dhoni- The Untold Story or recently released The Zoya Factor starring Dulquer Salmaan, fans have witnessed actors playing the role of a cricketer on the big screen. And then there have been many cricketers, who have tried their hand in acting and have done reasonably well. Irfan Pathan is the latest entry in the list of cricketers turned actors. So, let’s have a look at some Indian cricketers who went on to become actors.

Salil Ankola is a popular name in the entertainment industry and has featured in a lot of films. However, cinema was not Ankola’s first love as he started his professional career as a cricketer. The lad was a right-arm pacer who featured in one Test and 20 One-Day Internationals (ODI). Making his debut in 1989, Ankola didn’t get a lot of success in cricket and a sudden development of bone tumour resulted in his early retirement. After that, Ankola tried his hand in Bollywood and featured in movies like Kurukshetra and Pittah. In 2006, he also participated in the popular TV reality show Big Boss.

The former was a destructive right-handed batsman who demolished many great bowling attacks in his career. Patil was also the part of India’s 1983 World Cup-winning squad and scored also scored a quick-fire fifty in the semi-final against England. Soon after the World Cup triumph, Patil was soon offered a movie called Kabhie Ajnabi The. In the same movie, India’s wicket-keeper Syed Kirmani was playing an antagonist. The movie also hyped as it included fighting seen between Patil and Kirmani. However, the performance was not appreciated a lot from the audience and Patil resumed to play cricket.

Father of star Indian batsman, Yuvraj Singh, Yograj was a former seamer who featured in one Test and 6 ODIs. The former failed to mark in the cricket field and decided to choose a career on the silver screen. Yograj started his career with the Punjabi film industry and gained a fair amount of success. The former bowler also featured in some Bollywood movies. His most notable performance in 2013 when he played the role of Coach Ranveer Singh in Bhag Milkha Bhag, which was a blockbuster.

The flamboyant cricketer was a right-arm pacer who represented India in all three formats. Unfortunately, Sreesanth’s cricket career was afflicted by a spot-fixing scandal in 2013 which resulted in a lifetime ban. However, the ban was reduced to seven years and ended in August 2019. Post ban, the pacer tried his hand in movies and made his Bollywood debut with film Aksar 2. The bowler also featured in some Kannad and Malayalam movies. Along with that, Sreesanth also participated in reality shows like Jhalak Dikhhla Jaa and Big Boss.

Another popular name in Indian cricket who made his presence in the movies. The former batsman was a seasoned cricketer who represented India in 15 Tests and 196 ODIs. After calling it a day from cricket, Jadeja made his presence in some movies too. The former cricketer made his Bollywood debut in 2003 with the film ‘Khel’. The movie featured Sunny Deol and Sunil Shetty in the lead and Jadeja was playing a supporting role. His other notable performace came in the 2009 movie Pal Pal Dil Ke Ssaat.

The Afghanistan-born Indian cricketer was an all-rounder who proved his mettle with both bat and ball. In 29 Tests, Durani scored 1202 runs and claimed 75 wickets. The southpaw was known for his six-hitting ability. The former also had a remarkable record in First-Class cricket and was a popular name in the domestic circuit. After retiring from the game, the cricketer got offerings from Bollywood and he featured in 1973 film Charitra with Parveen Babi.

Along with these names, many prominent cricketers like Kapil Dev, Sunil Gavaskar, and Navjot Singh Sidhu played themselves in few movies. So, Cricket mixing with Bollywood is not the latest trend and Irfan Pathan will certainly learn from the journeys of the names mentioned above.

(The above story first appeared on LatestLY on Oct 15, 2019 01:39 PM IST. For more news and updates on politics, world, sports, entertainment and lifestyle, log on to our website latestly.com).