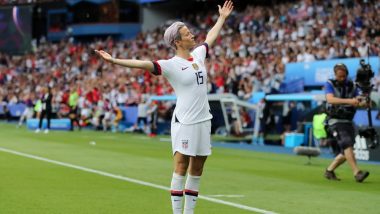 US Football Women's National Team captain, Megan Rapinoe's reaction on securing the goal required for entry into the semi-final in the 2019 Women's World Cup against France is being hailed as inspirational. The USA striker said that the goal was extra special because it came during the LGBTQ pride month. The image of Megan celebrating her goal was quick to go viral on social media. It came to be hailed online as an iconic sports photograph that should go down in the pages of history. Bill Simmons at the Ringer called the picture as one of his favourite shots of the decade. While for some, Megan's reaction showed victory, celebration and a great sporting moment, for others it was a hot topic for memes. Megan Rapinoe Insists 'You Can’t Win Without Gays' After USA Beat France 2-1 to Enter 2019 FIFA Women's World Cup Semi-Finals.

Megan stole the limelight as she guided the United States to its eighth consecutive World Cup semifinal. Ahead of the quarterfinal face-off against host nation France on Friday, Megan had made headlines for her response when asked if she would visit the White House if the USA wins the finals. Megan who is a well-renowned LGBTQ activist had said that the Donald Trump government does not fight for the same things that she fights for. Megan Rapinoe, US Women’s World Cup Co-Captain, Stands by White House Boycott Threat.

Here is Megan Rapinoe's reaction to securing a goal that inspired memes:

This is one of my favorite sports pictures of this decade. Thanks for being such an inspiration to my daughter @mPinoe - you were unbelievable today. pic.twitter.com/iMI9TGb1PT

This is one of my favorite sports pictures of this decade. Thanks for being such an inspiration to my daughter @mPinoe - you were unbelievable today. pic.twitter.com/iMI9TGb1PT

Me when I boil water and cook pasta instead of ordering delivery. pic.twitter.com/iN1gl0ZKRy

The feeling is unexplainable

"Give me your tired, your poor,

The wretched refuse of your teeming shore.

Send these, the homeless, tempest-tost to me,

I lift my lamp beside the golden door!" 🇺🇸 pic.twitter.com/ANGqLJ7hZv

When I do the easiest task on my to-do list pic.twitter.com/fTvrXoZYXB

when i do my core workout pic.twitter.com/eF3FpawVsK

Ahead of the match, Megan was quoted as saying by goal.com, "Go, gays! You can't win a championship without gays on your team, it's pretty much never been done before ever. Science, right there. I'm motivated by people like me and people who are fighting for the same things. I take more energy from that than trying to prove everyone wrong all the time. That's sort of draining to me. So yeah, to be gay and fabulous during pride month at the World Cup is nice." In Saturday's match, USA defeated France 2-1 in the quarter-finals. Megan registered goals in the 5th and 65th minutes of the match. The USA will next take on England in the semi-finals on July 6.

(The above story first appeared on LatestLY on Jun 30, 2019 01:23 PM IST. For more news and updates on politics, world, sports, entertainment and lifestyle, log on to our website latestly.com).