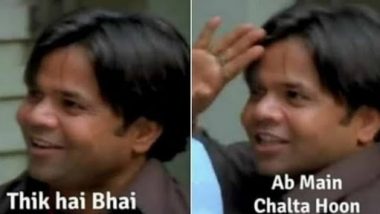 Several areas including Thane, Navi Mumbai, Panvel, Juhu, Andheri, Mira Road and Panvel were the areas that were largely affected by the power cut.  Mumbaikars took to Twitter to complain about the power outage. Adani Power also informed that there is a major power grid failure due to which supply is affected in most areas of Mumbai.

The incident has taken the internet by storm: Here are some viral memes

Please don't get excited and rush to the Governor's bungalow..

Once the electricity is back in Mumbai,

mumbai electricity gone and my phone is on 2%🤒☺️ pic.twitter.com/SXVywjCRVk

Repots inform there there has been a multiple tripping of lines and transformer supplying power to the metropolis. The restoration work is currently underway.

(The above story first appeared on LatestLY on Oct 12, 2020 10:59 AM IST. For more news and updates on politics, world, sports, entertainment and lifestyle, log on to our website latestly.com).