Tributes are pouring in on social media, remembering the ‘Missile Man of India,’ APJ Abdul Kalam on his fifth death anniversary. From sharing inspirational messages to images, netizens remember the former President with his teachings and life lessons through quotes by Kalam. 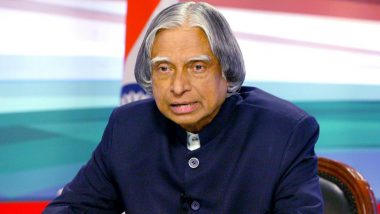 It is the 5th death anniversary of the 11th President of India, Dr APJ Abdul Kalam. Born on October 15, 1931, in Tamil Nadu, Abdul Kalam was a great man, an aerospace scientist, politician and an influential speaker. His teachings continue to inspire people from all the sections of life, influencing them to follow their dream. He passed away on July 27, in 2015, by doing what he always loved, addressing students at the Indian Institute of Management, Shillong. Today, India marks the fifth death anniversary of Kalam. Tributes are pouring in on social media, remembering the ‘Missile Man of India,’ APJ Abdul Kalam on his fifth death anniversary. From sharing inspirational messages to images, netizens remember the former President with his teachings and life lessons through quotes by Kalam. Incredible Facts About the 'Missile Man of India' That Will Make You Respect and Miss Him Even More.

Dr APJ Abdul Kalam was intimately involved in India’s civilian space programme and military missile development efforts. His contribution was remarkable and thus came to be known as the ‘Missile Man of India’ for his work on the development of ballistic missile and launch vehicle technology. On July 27, 2015, at the age of 83, Kalam collapsed while delivering a lecture at IIM, Shillong and died from a cardiac arrest. It was a great loss for the nation. But citizens continue to remember him, his teachings, quotes and influential words that have the power to motivate everyone in difficult times. Remembering Kalam on his death anniversary today, check out how netizens honour the 11th President of India. APJ Abdul Kalam's 5th Death Anniversary: Inspirational Quotes by The Missile Man of India That Continue To Motivate Students Aiming to Build a Better Future!

A Tribute to The Great Scientist & Our 11th President Of India 🇮🇳

He was the 11th President of India but will always be known as The People's President pic.twitter.com/R7IrnzBgK1

Unremitting Obeisance on the death of 11th President of India #apjabdulkalam fondly retain in mind on his 5th death anniversary.

Tribute to the 'People's President'

“To succeed in your mission, you must have a single-minded devotion to your goal.” Humble tribute to People’s President, #MissileMan, #BharatRatna Dr #APJAbdulKalam ji on his death anniversary. pic.twitter.com/FWNTDNDMnd

He Will Always be Remembered!

We'll never see a magnificent personality like him ever again!!

Kalam was elected as the 11th President of India in 2002. Widely referred to as the ‘People’s President,’ he returned to his civilian life of education, writing and public service after a single term. He was also a recipient of several prestigious awards, including the Bharat Ratna, India’s highest civilian honour. Kalam’s works and teachings will always be honoured and help us all to follow our dreams and make our country, a better place to live in.

(The above story first appeared on LatestLY on Jul 27, 2020 10:45 AM IST. For more news and updates on politics, world, sports, entertainment and lifestyle, log on to our website latestly.com).