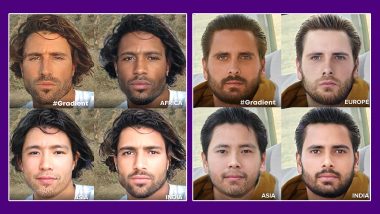 TV personalities and celebrities Scott Disick and Brody Jenner are facing immense backlash on Twitter for promoting an app that uses one photo of a person to make them appear as if they were from different races. Photo editing app, Gradient uses artificial intelligence to adjust the user's face to show how they would look if they were born on a different continent. It changes everything from skin colour, the shape of eyes, lips and structure of the face. On providing details it can make your look as if you were an Indian, or from Europe, Asia, Brazil, Africa and others. Jenner and Cohn both used filters to make them look Black as if they were Africa, Asia, Europe and India among others. Twitterati said that they were promoting digital 'blackface'. The celebrities were called racist for using the app. Scott Disick and Brody Jenner are known for their appearances on the reality show "Keeping Up With The Kardashians". Twitter Labels Donald Trump's Tweet of Edited Video of Toddlers Hugging as Manipulated Media, Netizens Have Mixed Reactions About This Move.

Disick had tweeted saying, "Tried new filters in the Gradient app. Which one is better?" He posted photos of his face with filters to look Asian, Indian, and European. 37-year-old Jenner posted his own photos using the app and face altered to look like he was from Africa, Asia and India. According to the Gradient app’s website, the AI Face a feature is a tool to "Find out how you would look like if you were born on a different continent." Canadian News Anchor Kori Sidaway Told to ‘Dress Appropriately’ for Showing ‘Too Much Cleavage’, She Hits Back With a Terrific Reply.

Both the tweets were subsequently disabled. Disick also posted a similar image on his Instagram account, with the comments section disabled. It is not known if it was a paid promotion or not. Gradient has not yet commented on the incident.

You need to try this new feature in gradient app, it’s crazy 😂. #ad

Anything for a buck. Of course Kardashians and Jenners are hawking an app on social media that digitally applies blackface. pic.twitter.com/xmVgAxrL4T

Criticisms Came From All Quarters:

i’m trying to understand how this kind of app has brody jenner and scott disick level budget. also why their managers wouldn’t have warned them that it was a bad idea 🤦🏻‍♀️

Not So Sure About The App:

The layers....there are so many obvious wrongs in one place...it's blowing my mind actually. Also there is something so bleak in itself about being Brody Jenner and tweeting a sponsored post about the Gradient app

Not Everyone Thinks the Same!

Y'all better play with the gradient app before they call it racist and ban it. pic.twitter.com/YZu1ThhQ2v

You need to try this new feature in the gradient app, it’s crazy 😂 pic.twitter.com/qnqn7q83xn

Gradient describes itself as "the next big thing in the world of mobile photo editing". Its founders Vladyslav Urazov and Bogdan Matveev are described as "artificial intelligence and machine learning enthusiasts." This isn't the first time Gradient has been hit with controversy. Last year, there were talks about its privacy policy for user photos and its tendency to charge users for subscriptions without their consent according to a report.

(The above story first appeared on LatestLY on Sep 24, 2020 12:38 PM IST. For more news and updates on politics, world, sports, entertainment and lifestyle, log on to our website latestly.com).