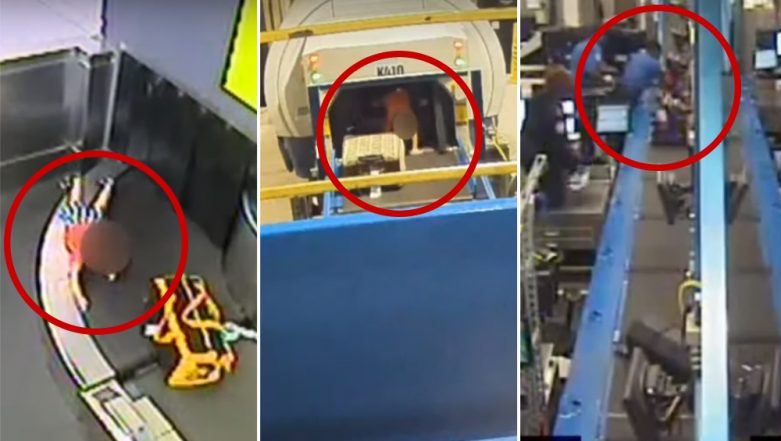 Travelling with a child, parents always have to be extra careful. A child's curiosity can often lead them into trouble. A mother had to experience something similar when her 2-year-old child accidentally jumped on the luggage conveyor belt at the Atlanta airport and fell in the TSA bag room. He was on the conveyor belt for about 5 minutes. The footage of the boy falling into the belt was captured on the CCTV camera in the premises. The incident ended up with the child getting his hand broken. Woman Hops Onto the Conveyor Belt at New Istanbul Airport Thinking ‘It Would Take Her to the Plane’; What Happens Next Is Crazy! (Watch Viral Video).

Edith Vega, the boy's mothers said that she was printing her boarding pass when the child escaped and ran to the belt. By the time she could look for him, it was too late. The incident took place at the automated baggage screening system via the Spirit Airlines ticket counter. Hartsfield-Jackson Atlanta International Airport released several clips of their surveillance video which show the young boy’s journey through the secured areas of the airport. Delhi: Three-Year Old Jumps on Baggage Conveyor Belt at IGI Airport, Gets Rescued at Second Level of Screening.

The video footage shows he walked through an unattended ticket counter and went directly in front of the moving belt. On the belt, he was pushed ahead by a yellow bag and was then trying to climb over another suitcase. But he could not and then ended up in the baggage drop. While the little ride must have seemed fun for the guy, he ended up with cuts on his arm and also a fractured hand. Atlanta Fire and Rescue got the boy and took him and Vega to a local hospital. The incident is once again a reminder that parents should always be careful of their little one.