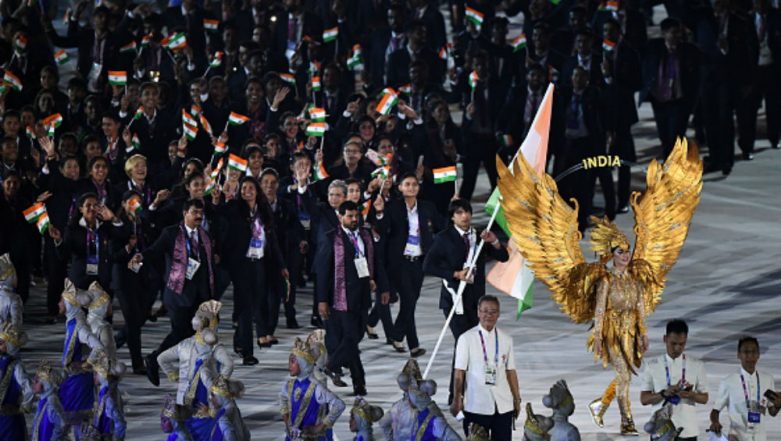 India athletes walk in the parade during the opening ceremony of the Asian Games 2018. (Photo: Getty Images)

After the opening ceremony, the action at the Asian Games 2018 will kick off on Sunday (August 19). As far as India is concerned it is going to be a busy day for the Indian contingent. The Indian athletes will be in action across many sporting events like hockey, shooting, wrestling, and badminton. Below you will find the detailed schedule of India’s schedule at the Asian Games 2018 day 1 in IST. A Unified Korea! Asian Games 2018 Sees South Korea and North Korea March together in The Opening Ceremony at Jakarta: Watch Video.

Teenage prodigies Anish Bhanwala, Manu Bhaker and Elavenil Valarivan will carry India’s medal hopes in the shooting event of the Asian Games 2018, and standing in their way will be the mighty Chinese and South Koreans. In women’s hockey, former champions India will have to recover from their medal-less World Cup campaign as they look to clinch the title at the 18th Asian Games and seal a Tokyo Olympics berth. The women’s Indian hockey team will face hosts Indonesia.

In badminton in-form PV Sindhu and Kidambi Srikanth will look to break new grounds as they spearhead India’s charge for an elusive gold at the Asian Games 2018. Meanwhile, the Indian tennis contingent squad has finally figured out its doubles combinations less than 24 hours before the start of competition at the Asian Games, a far from ideal scenario courtesy Leander Paes’ sudden withdrawal. 2018 Asian Games Schedule PDF Download in IST: Full Fixtures With Match Timings of Indian Contingent at Jakarta Palembang Asiad.

In wrestling, rising star Bajrang Punia and confidence-personified Vinesh Phogat will lead the Indian charge on the mat even as double Olympic medallist Sushil Kumar has a point to prove when the freestyle competition at the Asian Games 2018. (Inputs PTI).