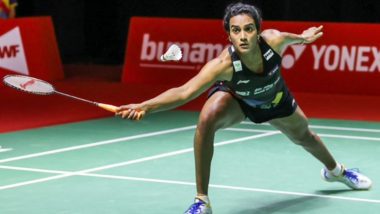 In the two other all-Indian clashes of the day, Sindhu defeated Ashmita 21-7, 21-18 while Aakarshi Kashyap overcame the challenge of Malvika Bansod 21-12, 21-15 in the women's singles category. India Open 2022: ‘Seven Players Withdrawn After Testing Positive for COVID-19’, Says Badminton World Federation.

Sen, the third seed and the highest-ranked player in the fray after the top two seeds Kidambi Srikanth and B Sai Praneeth withdrew due to Covid positive tests, will now face Ng Tze Yong of Malaysia on Saturday. Sindhu will take on Thailand's Supanida Katethong, who received a walkover in the quarter-finals after Singapore's Jia Min Yeo conceded the match due to a high fever.

Sen versus Prannoy was definitely the marquee clash of the day and the two players did not disappoint in terms of effort and aggression. Sen, the younger of the two, started with his trademark attacking instinct and took an early lead.

But Prannoy then began to step on the gas and his down-the-line smashes did hurt Sen's gameplan and the third seed began to make mistakes. But there was not much to differentiate between the two till 13-13 before the former claimed eight of the next nine points to pocket the game.

If Sen was feeling any pressure at this stage, he did not show that in his approach at the start of the second game and opened up a 3-0 lead. Prannoy was guilty of making too many errors while trying to force the pace and never recovered after he conceded a 4-12 lead.

It was Prannoy who started the decider better, racing to a 6-1 lead. But the next point probably changed the direction of the match. Sen defended a flurry of smashes from his opponent and scored the point with a cross-court drive.

Sen won nine of the next 11 points by keeping the shuttle slightly away from the net on dribbles and attacking Prannoy's body a lot more.

Prannoy did manage to level the score at 12-12 but could not maintain the tempo as Sen showed more patience during the rallies and made the most of that.

Speaking about the match, Sen said, "(In the) first game both of us were playing really fast and the aggression was also there. After the second game, we started to rally more and I was a lot more comfortable."

In the day's other key match, Sindhu looked like racing away to victory against Ashmita Chaliha when she pocketed the opening game 21-7. But if she was looking for yet another easy outing, her opponent wasn't ready to just surrender without a fight.

Ashmita has for long been considered a special talent among the next generation shuttlers in the country and the 22-year-old from Assam showcased some of her attacking skills to put her much illustrious compatriot under pressure.

However, the experience of Sindhu made the difference at the business end of the second game with the score tied at 15-15. The top seed started moving her opponent a lot more and though Ashmita jumped and dived to keep the shuttle in play, it wasn't enough to force a decider.

Earlier, Aakarshi Kashyap ended Malvika Bansod's run in the tournament. Malvika, who had upset Saina Nehwal in the earlier round, looked nervous from the start and her opponent ensured that she could never settle down.

Aakarshi mixed things up by being more aggressive than usual and forced Malvika into committing a lot of unforced errors. It was only at the end of the second game that Malvika looked like playing her game of engaging the opponent in long rallies. But by then she was 10-18 down and it was too little too late.

The Indian combination will now face the eighth-seeded French pair, Fabien Delrue and William V'lleger, who got the better of Ireland's Joshua Magee and Paul Reynolds 21-9, 23-21 in the other quarter-finals.

(The above story first appeared on LatestLY on Jan 14, 2022 09:29 PM IST. For more news and updates on politics, world, sports, entertainment and lifestyle, log on to our website latestly.com).